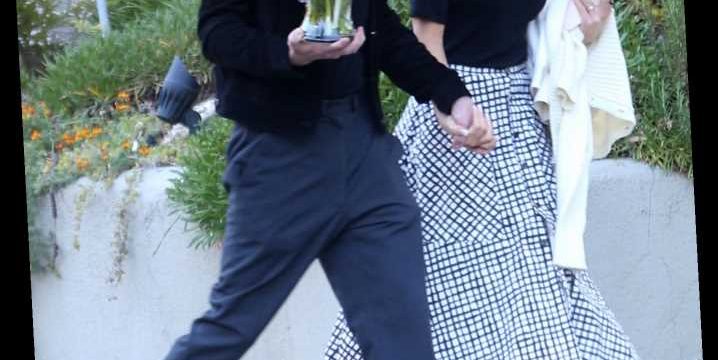 Lily James appears to be getting serious with her boyfriend Michael Shuman.

Last week, the 31-year-old actress and the Queens of the Stone Age rocker, 35, were spotted strolling hand in hand with one another in Los Angeles. They were on their way to meet Shuman's parents, E! News reported.

For the outing, James wore a black T-shirt and a black and white checkered skirt, which she accessorized with a white sweater that she held in her arms. Meanwhile, Shuman — who was carrying a vase full of flowers in one hand — wore a black shirt and jacket, a pair of dark-colored pants and a set of black Chelsea boots. Earlier this year, the English actress was spotted with the bassist in Suffolk, England, where she was filming her forthcoming film, What's Love Got to Do With It?

James previously dated The Crown actor Matt Smith. They reportedly split after five years in December 2019, then reconciled in May 2020 before splitting for a second time.

Last summer, James sparked romance rumors with Captain America star Chris Evans. The two were first seen together in early July, when they shared a taxi after leaving Mark's Club in London. Days later, they were seen enjoying ice cream at a park near Buckingham Palace.

James' most recent outing with Shuman comes about months after she was spotted with actor Dominic West in Rome back in October. In photos published by the Daily Mail at the time, James and West, who is married to Catherine FitzGerald, were seen riding a scooter together and enjoying lunch al fresco.

More photos showed James and West — who were filming a BBC adaptation of Nancy Mitford's classic novel The Pursuit of Love at the time — at the airport in Rome together on Oct. 12, just one day before West and FitzGerald, 49, publicly addressed the reports about his outing with James.

Last October, West and FitzGerald kissed and posed for photographs outside of their home in London with a sheet of paper that read: "Our marriage is strong and we're very much still together. Thank you. Catherine and Dominic."