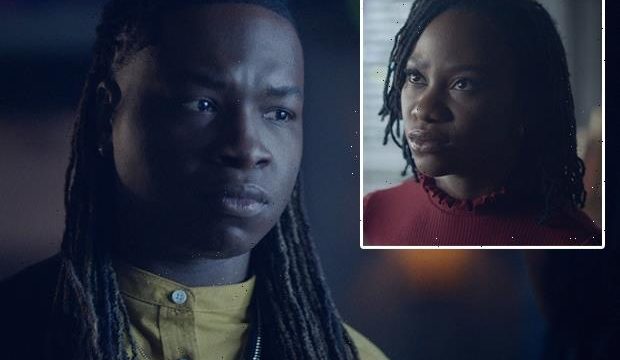 Despite impaling Hope with a large, pointy weapon on last week’s Legacies, Cleo insists, “I am not the villain everyone at this school thinks I am.”

The Salvatore School’s misunderstood muse pleads her case to Kaleb in TVLine’s exclusive sneak peek of tonight’s episode (The CW, 9/8c) after he confronts her about her shady shenanigans. Specifically, he wants to know more about her long con to trick Hope into activating her vampire powers.

“You’re the one who insisted that I be honest and real, and now you’re going to be tight-lipped about things?” he asks. But it isn’t until he calls her a hypocrite that she starts speaking up.

While Kaleb interrogates Cleo at the school, Hope and Landon — who was apparently the one hiding behind that skull mask all this time — are tasked with retrieving the artifact. And as Kaleb tells Cleo, “Spoiler alert: They plan on stuffing your ass back in it.”

We know from the episode’s official logline that “Cleo opens up about her past,” but let’s be honest, that really could mean just about anything.

Hit PLAY on the video above for a sneak peek of tonight’s Legacies, then drop a comment with your thoughts below.