The true events that form the basis of “Just Mercy” took place 20 years ago, but they sadly resonate across many eras, from the distant past all the way through the present. The saga of Harvard grad Bryan Stevenson, the social-justice advocate who fought to exonerate condemned men in Alabama, relies on the beats of a familiar courtroom procedural to illustrate the many hurdles involved in fighting wrongful convictions. It turns out this material doesn’t need fancy tricks when it has Michael B. Jordan, who brings such credible drive as the indefatigable Stevenson he practically carries the movie across the finish line by himself.

But there’s more to it than that. “Just Mercy” is the social-justice crowdpleaser that director Destin Daniel Cretton was bound to make at some point following his 2013 breakout “Short Term 12,” a smaller-scale look at institutional challenges and the passionate figures wrestling with the machinery within. (It’s also a welcome return to form after the misbegotten family drama “The Glass Castle.”) Cretton adapts, with a confident hand, Stevenson’s 2014 bestseller about his efforts to exonerate Alabama family man Walter McMillian. While the movie runs too long and the message grows thin, it’s a sturdy window into the corruption of the judicial process that can send an innocent black man to death row.

A subdued Jamie Foxx plays the incarcerated McMillian, who gets arrested for the murder of a teenage girl in the movie’s brisk opening sequence and promptly winds up with a death sentence. By the time Stevenson gets to him, McMillian has already given up hope of exoneration: Years of lawyers and appeals have passed him by, and no amount of evidence proving his innocence has made a difference. But his despair only motivates Stevenson to dig deeper, joining forces with local advocate Eva Ansley (Cretton regular Brie Larson) to probe McMillian’s case history and follow the bread crumbs that could allow him to receive a new trial. He finds them in Ralph Myers (a dead-eyed Tim Blake Nelson), the convicted felon whose testimony against McMillian was likely coerced by police. It doesn’t take a genius to see the corruption at hand, but Jordan’s sober performance speaks to the character’s ability to stay focused despite the racism looming around him. 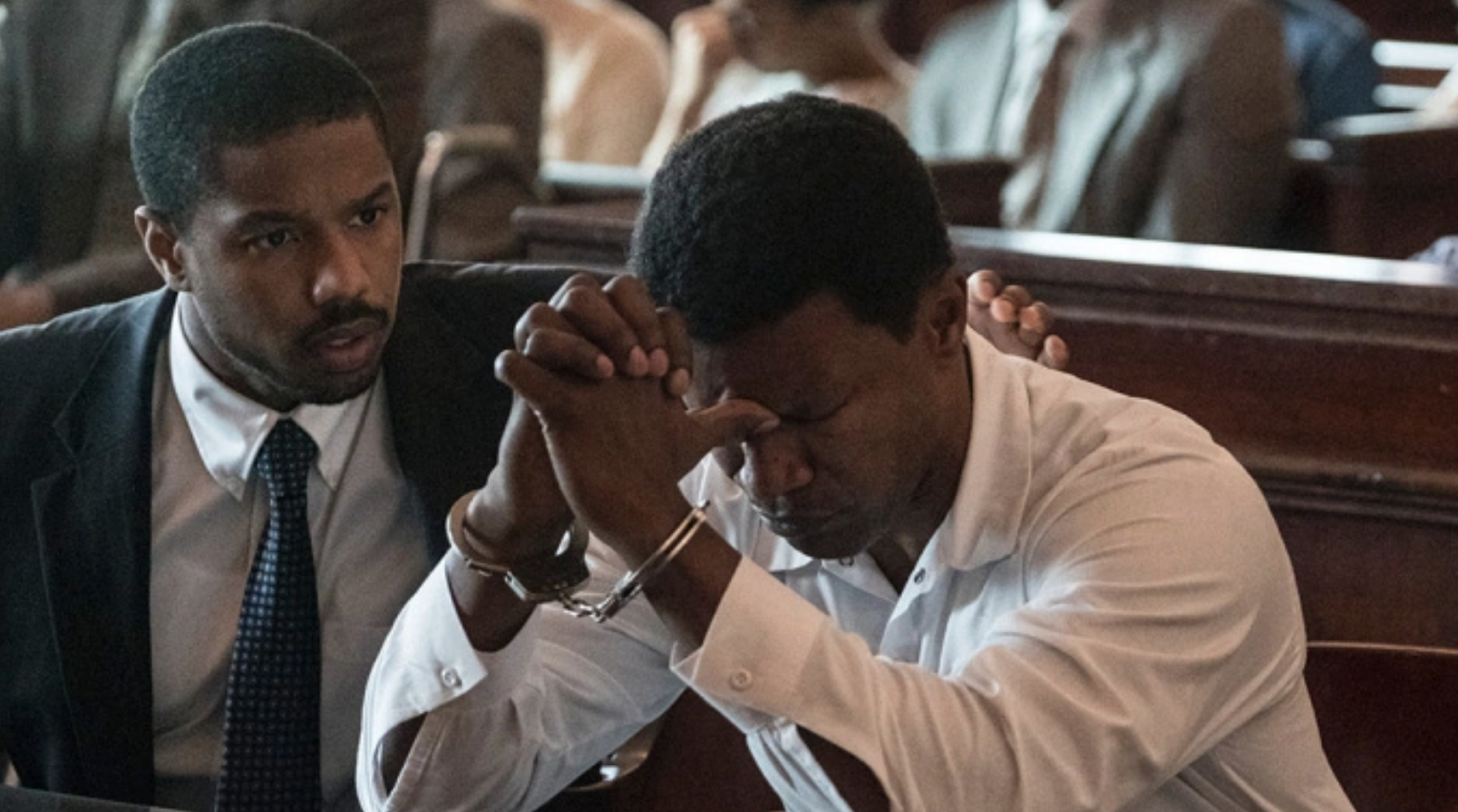 With McMillian’s case unfolding in Monroe County, where Atticus Finch fought to exonerate a black man in “To Kill a Mockingbird,” Stevenson strikes a notable contrast to the Finch archetype: The movie swaps white liberal guilt for the courage of a young black man who experiences the threat of racial profiling just as much as his clients. Cretton litters the story with a few too many blunt reminders of this challenge, from the white prison guard who might just have a sympathetic side beneath his racist threats, to the police officers that pull Stevenson over for no good reason as he continues to gain attention for the progress of his investigation. The character’s seemingly flawless demeanor under duress is a constant reminder of the artifice at hand, but Jordan brings gravitas to even the most contrived moments.

Stevenson’s investigation doesn’t contain nearly enough twists to justify the 136-minute runtime, especially given how many of its circumstances are predetermined. But Cretton does manage to squeeze in a remarkable subplot that practically functions as a standalone movie, exploring the bonds that McMillian forms with two other men on death row (Rob Morgan as a PTSD-riddled wreck, and O’Shea Jackson Jr. as the most idealistic of the bunch). Their dynamic amplifies the challenge involved in mounting resilience at death’s door with heartbreaking results; a devastating execution set to the powerful hymn “The Old Rugged Cross” ranks as Cretton’s best filmmaking to date. These scenes call to mind the grim execution drama “Clemency,” which won the Sundance Grand Jury Prize some eight months before “Just Mercy” landed on the fall festival circuit, and together the two movies speak to the urgency of the subject at hand.

But while “Clemency” lingered in the despair of a system readily designed to kill innocent people, “Just Mercy” searches for uplift — and finds it, again and again. Stevenson’s heroic perseverance never wavers, and the dynamic he develops with the morally conflicted DA Tommy Chapman (Rafe Spall) sets the stage for a final courtroom scene that practically begs for big applause moments.

Cretton’s script often turns to his characters to explain the stakes at hand. “You’re guilty from the moment you’re born,” McMillian says, clarifying the rage that percolates throughout the movie. “It’s just another excuse to lynch a black man,” one of his peers concludes. These aren’t exactly subtle extrapolations, but “Just Mercy” takes a maximalist approach to amplify its message. It may not be groundbreaking cinema — but as a celebration of what it takes to eke out justice in a broken system, it’s a welcome return to formula.