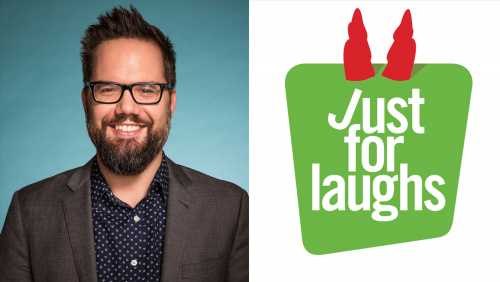 The Just For Laughs Group has named Spencer Griffin Head Of Television Development. The announcement was made today by Groupe CH, Bell Media and ICM Partners.

In his new role, Griffin will oversee various television projects under the Just For Laughs (JFL) banner. He will be the creative mind behind developing specials and series for broadcast, cable and streamers. His responsibilities will include soliciting, procuring and developing new properties with both new and established talent, as well as continue foster JFL’s relationships with artists. Griffin will report to Just For Laughs President, Bruce Hills.

“Nobody knows comedy talent like JFL and, in my unbiased opinion, they’ve done it again,” joked Griffin. “In all seriousness, I’m thrilled for this new role and excited to get started.”

“Spencer is an incredible addition to our growing team, bringing unrivaled experience, creativity and vision to our TV department,” said Hills. “With a plethora of comedy-related TV content available for audiences to watch, adding Spencer’s expertise, drive and tenacity to the table is hugely beneficial for us, and crucial to our growth.”

Prior to his new post at JFL, Griffin was Head of Live Action Development and Production for Stoopid Buddy Stoodios, the production company behind several hit cult comedy series including  Adult Swim’s Robot Chicken as well as Crackle’s Supermansion.

Griffin’s resume also includes developing and selling television projects to major networks including HBO, Starz, Hulu, and E!, He was recently SVP and EP of Big Breakfast, contributed to the comedy brand’s millions of YouTube subscribers and various awards. He also worked with Jason Bateman and Will Arnett, as a producer of their comedy enterprise DumbDumb. Griffin is a member of the Producers Guild of America, and has been involved with a variety of well-respected comedy programs. His additional credits as an executive producer include TruTV’s Adam Ruins Everything, PopTV’s Hot Date, YouTube’s CollegeHumor, IFC’s Comedy Music Hall of Fame, MTV’s The Middle of the Night Show and others.