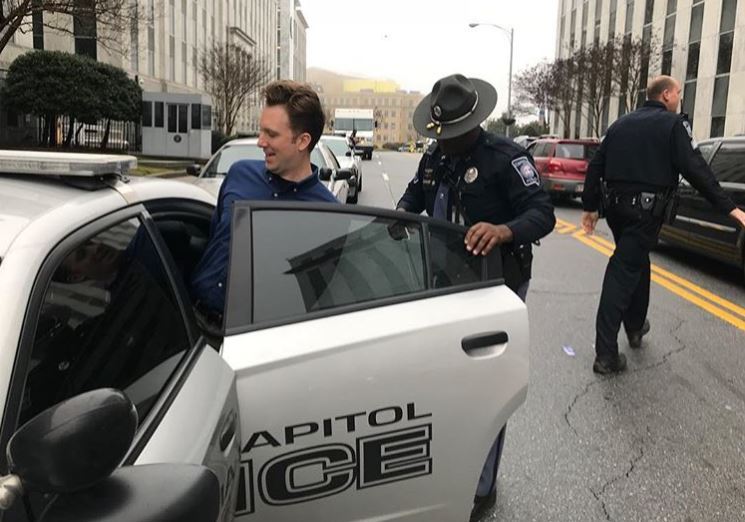 After one season hosting late-night series The Opposition, in which he assumed the unhinged gas-baggery of an Alex Jonesian conspiracy theorist, Jordan Klepper returns to Comedy Central Thursday night at 10:30 PM ET to host a docuseries.

In Klepper, the improv comic is doing the kind of field work anyone who saw his Donald Trump campaign rally field pieces for The Daily Show, knows to be his forte.

This time, however, he’s embedding with veterans who think wrestling is the way to deal with their PTSD, bayou pipeline protesters, an underground university for undocumented students in Georgia, deported U.S. military veterans, and Native Americans fighting for visibility.

“I could go out somewhere and be the buffoonish guy who is stumbling through things again. But it feels like, in weird 2019, authenticity is the word that keeps being thrown out,” Klepper explained of the decision to get out of the studio.

“We initially thought our theme for the season was going to be tribalism – the partisanship that is going on in the country…But we quickly realized that was less interesting than the things they were fighting for, the causes they had. So it became a show about activism and movement and people who are trying to make a change, small and large, and I could ride shotgun with them.”

The episode in which he embeds with an environmental activist group protesting a pipeline scarring the bayou was “a big reality check” for him, Klepper told Deadline.

“I, for years, was in New York. covering stories like that. And you’d be like, ‘These are heroes that do this.’,” he said. But, having ridden shotgun with them, he now describes the effort as “messy,”  “imperfect,” and “not as thought-out as you’d want it.”

“We drove an hour to get to the boats and nobody brought flashlights and we’re in the bayou and it’s 4 AM and we’re riding for an hour into the bayou without flashlights, without life preservers and we’re kind of like, ‘Is anybody thinking this through?”

“I love this energy but I’m wondering if this is pointed in the right direction,” Klepper said, conceding he and crew made more than one Don Quixote reference during that shoot.

In another episode, “Deported F**king Vets,” Klepper joined Manuel Valenzuela, a former Marine who, after barely escaping being deported himself, bought an RV and set out across the country, shoving his face in front of Presidents and wannabe Presidents to advocate for undocumented immigrants ejected by the country they served in the military.

“Honestly it blows my mind, Manuel popped up two weeks ago at an Elizabeth Warren event and he confronted her,” Klepper enthused.

“I’m inspired by a guy like that, but it does feel at times like he can’t find traction,” he added. “I’m glad there are people like him who are fighting. Sometimes it makes me sad. I don’t know if it’s the most effective way.”

That, of course, is where Klepper and his cameras come into the picture.

Though the topics are serious, the comedy comes in his being the guy who is “not great out in the woods,” he said – which, having watched several episodes, is an understatement.

Klepper drew a lot of attention to his new series when he got arrested in Atlanta in February, while filming at a protest about undocumented students. He was shooting at a Board of Regents meeting in the Georgia Capitol Building, when he and others were ordered to leave. They didn’t, and got busted by the Georgia State Capitol Police for criminal trespass.

“I was an arrest virgin,” Klepper acknowledged, when asked.

He thought twice about becoming part of that story, not wanting the series to be “about me going and being an activist for everyone else.”

But the die was cast when activists kept telling Klepper he needed to “weaponize his privilege.”

“You’re a white guy. You have a TV show. Congratulations. A lot of people don’t have that. You need to weaponize that privilege,” Klepper remembered one activist telling him pointedly.

“I got that multiple times. Rightfully so,” he added.

So he spent 12 hours in the jail cell with the arrested protesters, including several pastors. One of whom was Pastor Matt. And that made all the difference.

“He was my grandmother’s pastor 10 years ago,” Klepper said.

“I met him a decade earlier, in Kalamazoo, Michigan. I’m an atheist. My grandma loves the church… I meet Pastor Matt and I probably eye rolled.”

Fast forward 10 years, Pastor Matt spoke passionately about this cause. “And it took any doubt in my mind. My grandma says this is okay, for god sake!” Klepper recalled.

“I fell in love with this guy; all of the pastors in jail were wonderful,” the show host added, saying he came away better understanding “the importance of the church in social activist movements.”

Klepper isn’t always so sympathetic to his subject. In another episode, he joined 2nd Amendment zealots trying to do away with the last shred of open-carry restriction in the state of Texas. The protesters went into a Stop & Shop toting AR’s, which the woman behind the counter was okay with – though she would not allow Klepper’s camera into the shop.

When asked, she confirmed to Klepper she had a gun behind the counter.

“I’m the only one in the Stop & Shop without a gun,” Klepper joked-but-not-really.

While speaking passionately about the series and its possibilities going forward, he acknowledged, when pressed, that it’s exhausting.

“There is something so nice about a desk. In the field you get to meet people and it’s a totally different skill set and I love that.”

“But there is something really nice about working on a very fixed schedule, with a staff of 100, and by the end you have a sheet of very funny jokes and an audience who is told to laugh at those jokes in an air-conditioned studio,” Klepper said.

“That’s how you end your day, every day.”