A solemn but sturdy Joe Biden took to airwaves tonight in his first presidential primetime address to tell a divided and coronavirus battered America that help is truly on the way with vaccines and financial aid. Just 50-days in office, Biden’s careful crafted speech also proved a steady but stark contrast to his predecessor in both style and substance.

“A year ago we were hit with a virus that was met with silence, and spread unchecked,” President Biden started off in remarks that never mentioned Donald Trump by name, “Denials for days, weeks, then months. That led to more deaths.”

Covered on all the broadcast networks, cabler newsers and even Newsmax and OAN, the just over 20-minute address from the White House’s East Room like so much of Biden’s new presidency was torn straight from the Ronald Reagan playbook with a 21st century tweak. Or as CNN’s Anderson Cooper said after the speech of the Ernest Hemingway quoting and sometimes near whispering Biden: “There was sort of a grandfather approach to his presentation.”

Indeed, there was a lot of Uncle Joe tonight, and for the most part it was a flawlessly performance that moved from Commander-in-grief to the Great Unifier.

“I need you, I need every American to do their part, that’s not hyperbole, I need you,” the President said, almost leaning over the podium and looking deep into the camera.

“If we do our part, if we do this together, by July the fourth, there is a good chance that you, your family and friends will be able to get together in your backyard or your neighborhood and have a cookout or a BBQ and celebrate Independence Day,” Biden added, at one point sounding a bit like fictional POTUS Thomas Whitmore. “After this long hard year, that will make this Independence Day something truly special, where we not only mark our independence as a nation, but we begin to mark our independence from this virus.”

“How after long dark year, one whole year, there is hope and light and better days ahead,” Biden added as he wrapped up on a high of reopened schools, economic growth and vaccinations. 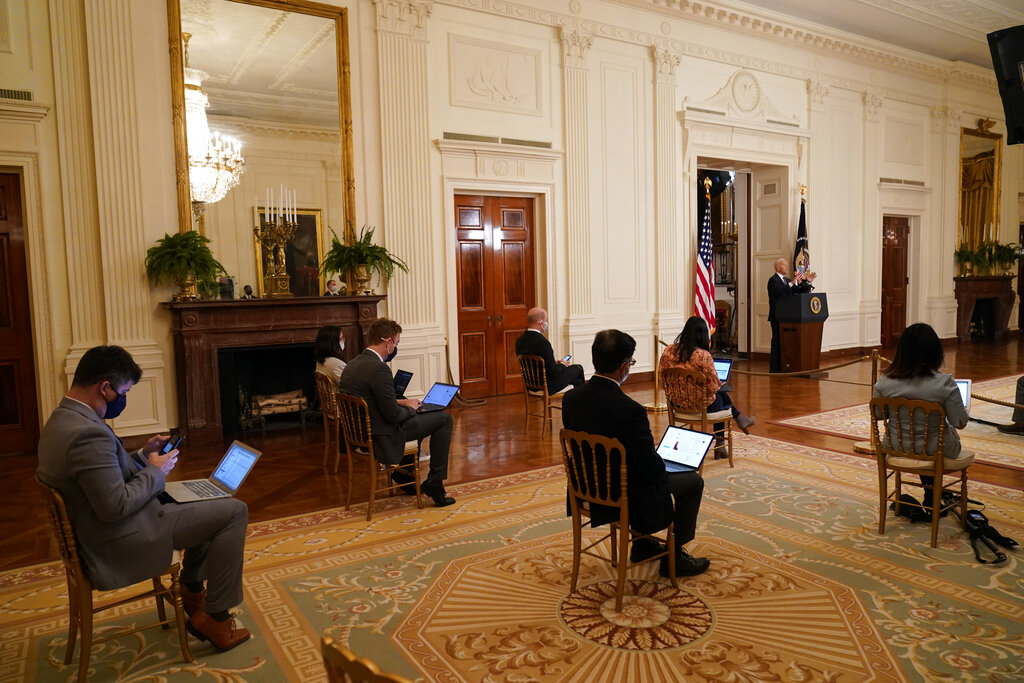 “My fervent prayer for our country is that after all we’ve been through we’ll come together, as one people, one nation, one America,” Biden said leaving his Vice-Presidential days far behind as the top dog. “I believe we can and we will. We’re seizing this moment and history, I believe will record, we faced and overcame one of the toughest and darkest periods in this nation’s history …I promise you, we’ll come out stronger with a renewed faith in ourselves and a new commitment to one another, to our communities, to our country

Then again, unlike anything the 40th POTUS would have said, the early part of the 46th POTUS’ speech was a message to Republicans and independents who distrust the government, a tenuous situation at a time when convincing much of the public to get vaccinated is necessary for herd immunity. “We need to remember that the government isn’t some foreign force in a distant capitol; it is us, all of us, we the people,” Biden said with an echo of FDR and JFK.

The specific seizing of the moment comes the $1.9 trillion American Rescue Act is now the law of the land and Covid-19 cases have seemingly plateaued. Also, as more than 1500 Americans are still dying every day, Biden knows has strong across the board approval for his actions. Halfway through the first 100 days of his administration and holding a big legislative win that he signed Thursday and will take on the road next week, the President clearly wants to catch the rising tide of the 77% of Americans who feel the worse of the pandemic is behind us.

“If it fails, I will acknowledge it failed, but it won’t,” a defiant Biden stated of the wide-ranging and big bucks ARA near the end of his speech, letting the Uncle Joe personal slip just a second to show the steely politician he is and has long been.

To that end, Biden’s initial news out of the speech — that he would direct states to make vaccines available to all adults by May 1 — also is in line with the way that his team has approached their response to the pandemic: don’t overpromise. As it is, vaccinations are very quickly becoming much more widely available, and vaccination rates have shot up.

Taking full advantage of his audience and his bully pulpit, Biden strongly denounced rising vicious hate attacks” on Asian-Americans in language the nation hasn’t heard from a President in years. “So many of them are fellow Americans, are on the frontlines of this pandemic trying to save lives – and still are forced to live in fear for their lives just walking down streets in America,” Biden declared. “It’s wrong. It’s un-American. And it must stop.”

Fox News Channel’s Tucker Carlson opened his show by saying that they would go live to the East Room, but still said he found it “odd” that the White House would pick this date, the anniversary of the lockdowns, as a time to “celebrate.” It was now typical shiv by Carlson on the Democrat. While Biden’s team spent a great deal of time preparing for the primetime moment, the White House has never suggested that the president’s speech would be a time of jubilation.

Biden’s speech tonight comes exactly one year after the W.H.O. formally declared COVID-19 a global pandemic, the NBA pulled the plug on their season, and, as Deadline exclusively reported, Tom Hank’s tested positive for the disease.

Void of insults and baiting, the live remarks from the 46th POTUS Thursday stood in distinct contrast to the error-filled and otherwise disastrous speech on the coronavirus by his predecessor on March 11, 2020. A noticeably uncomfortable and typically xenophobic Donald Trump hunched over the Resolute Desk in the Oval Office and sought to downplay the pandemic with travel restrictions and false assurances that his administration would institute “the most aggressive and comprehensive effort to confront a foreign virus in modern history.”

Which it certainly wasn’t, with almost 530,000 Americans dead as of today and the economy in tatters. It is an America that saw the FNC devouring former Celebrity Apprentice lose his re-election bid based largely on his failed handling of the pandemic.

At points using relevant props like a mask to make his point, the famously empathic Biden took his own aim at his critics and rivals in a coded language that might have even made the Great Communicator proud. “National unity isn’t just how politicians vote in Washington or what the loudest voices say on cable or online, unity is what we do together as fellow Americans.”

Of course, Fox News poured on the partisan hot wax in real time with an on-screen lower third that both hilariously and sadly read: BIDEN SPEECH NEARLY FINISHED; TUCKER WILL RESPOND.

And respond the primetime host did, though not that coherently.

Carlson told his viewers that he found Biden’s address “strange” and “surreal.” He added, “It felt a little bit like a dream sequence.”

Missing the moment for all but his target audience, the FNC host then further criticized the speech, seemingly because it put too much faith in vaccines and did not address those who didn’t want to get the vaccine. Then, in a flash of Fox-esque staged outrage, Carlson blasted Biden for telling Americans how they could spend the Fourth of July – which actually wasn’t what the President had said just minutes before.

Still Carlson took the relative high road compared to his conservative cable rivals on Newsmax.
Dick Morris’ post-game analysis was a water torture of Biden not giving Trump credit for the vaccine. “This is the rooster taking credit for the dawn,” quipped Bill Clinton’s former one-man braintrust.

Nope, this is Joe Biden’s war to wage now, and tonight he sounded like a winner.