During today’s Sunday Brunch, hosts Simon Rimmer and Tim Lovejoy invited Jimmy Carr, Vogue Williams, Alex James, Steve Davis and Kavus Torabi on to the Channel 4 show. Although, before they had even introduced what was coming up on the programme, Jimmy threw it into chaos after admitting he was hungover and didn’t want to be there.

Introducing the programme, Tim began: “We are joined this morning by Jimmy Carr, Vogue Williams, Alex James, Hannah and Dot from London Grammar are over there too.

“How are we this morning, are we all well? Jimmy?”

Jimmy replied: “I’m quite hungover and there’s no makeup on this show so I would rather not be on television right now if I’m honest with you.

“But, I am sure that’s all the guests feel on Sunday Brunch.” 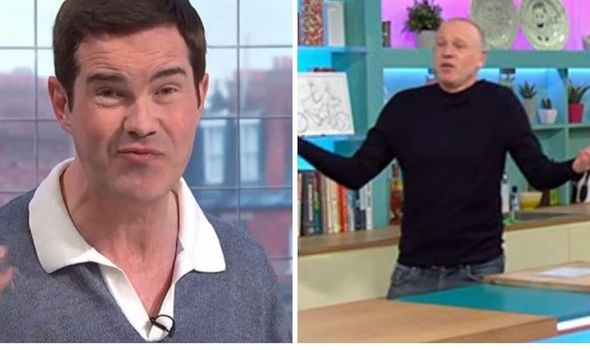 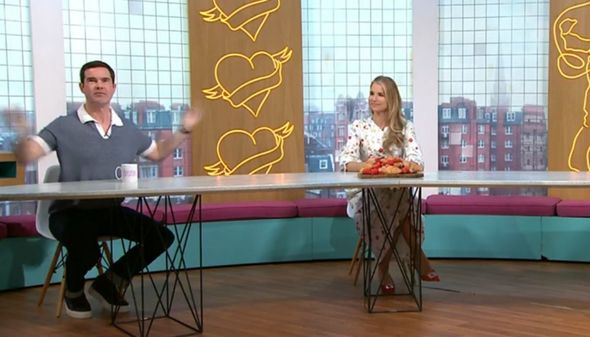 Tim explained: “It’s a pandemic we’re not allowed makeup so…”

“How are we not allowed makeup? The makeup people need to eat too,” Jimmy continued. “They need their jobs back.

“You’ve got the camera people. They could be replaced by machines and you know it.

“No offence cameras, all the worst angles on me.” 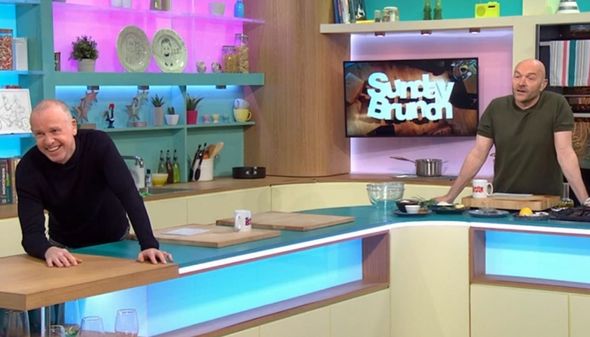 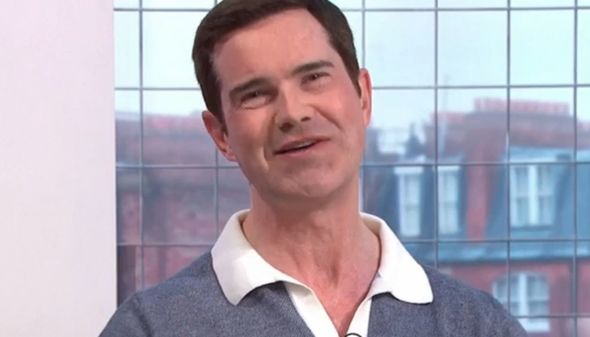 The comedian added: “I’m a little bit hungover yeah just because it was the first Saturday you could go out.

“It was a bit chilly and so I went on to the spirits a bit too early.”

Tim joked: “It’s a long show as well so good luck with that.

Turning to their other guests, the host asked Alex and Vogue how they were feeling.

Alex told them: “I’m feeling remarkably fresh, It was a beautiful morning this morning.”

Vogue went on to explain that she had been up since 4.30am for her radio show and admitted she went to bed at 8pm last night.

“I know Jimmy is really jealous,” she began. “I can smell you from here.

“Mornings are my best times. I was asleep by five to eight last night. I feel so smug.”

Later on in the programme, the Sunday Brunch camera people decided to have a joke with Jimmy as they just focussed on him, despite the fact he admitted to being hungover.

Viewers were loving the segment, taking to social media, one tweeted: “Jimmy Carr hanging like a bat with no makeup on is making my morning.”

Another commented: “Camera people sticking it to Jimmy making me wheeze.”

A third added: “Great sense of humour on today’s cameraman.”

“The camera folk on Sunday Brunch are legends,” a fourth said.

A fifth tweeted: “Poor Jimmy getting ripped by the Sunday Brunch camera crew.”

Sunday Brunch returns on Sunday at 9.30pm on Channel 4.