Jersey Shore: Family Vacation Season 5 ended with the finale episode “The Lie Detector Test.” There’s still more Jersey Shore to come — the second half of season 5 is currently filming. Find out what truths were uncovered in the episode on the roomies’ last day in the Florida Keys.

Before heading back home, the Jersey Shore cast concluded their trip with a family day. The kids painted coconuts while the dads — and Vinny Guadagnino — competed in the first Flip Flop Champion of the World race in the Wide World of Guido Sports. Vinny, Chris Buckner, Zack “24” Carpinello, Mike “The Situation” Sorrentino, and Chris Laraangeira raced for first place wearing scuba fins.

Despite Zack Clayton’s wrestler persona taking over and talking trash, he ran the wrong race, looping around beach chairs instead of running directly into the water per his fiancé’s instructions. Instead, Chris took home the win for Team Buckner. “Whether it’s in the bedroom or on the race track, I always finish first,” Chris told cameras ahead of his win.

Before leaving for his Las Vegas gig, DJ Pauly D took over Deena Cortese’s role of event coordinator and orchestrated a lie detector test for his roommates. Naturally, he left a note for Mike to explain the situation. John, who Double Shot at Love fans might recognize from season 1, arrives at the Isla Bella Resort to grill the roommates with questions they came up with for each other. 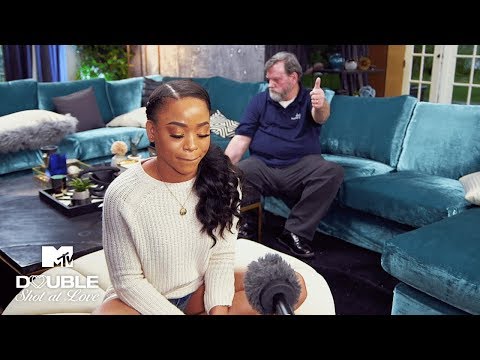 Initially, Chris and Angelina Pivarnick are hesitant about the lie detector test, thinking the questions will focus on their relationship. But in the end, all of the roommates had a good time with the light-hearted questions that John asked.

“Did you ever have a crush on Angelina,” John asks Vinny. “That’s a hard no,” Vinny replies, but John determined his answer was inconclusive.

“Do you wish production would stop showing [the clip where you show Mike your bikini]?” John asked Deena. In the infamous clip, Deena accidentally removes her bathing suit bottoms in front of Mike while trying to show off her bikini.

During Chris’ lie detector test, he confirmed he and Angelina had sex before leaving for the trip. “Do you love your wife and see yourself with her forever?” John asked Chris — a question from Angelina.

“Yes,” he replied, a truth confirmed by John. “To hear that Chris loves me makes me feel so much better,” Angelina tells cameras later. At publication, Chris and Angelina are going through a divorce.

Other notable truths cleared up by John include Angelina’s involvement in the note — if she didn’t tell Nicole “Snooki” Polizzi and “JWoww” what Ronnie Ortiz-Magro did that night, they never would have known what to include in the letter to Sammi “Sweetheart” Giancola. Nicole also admitted she overreacted at Angelina and Chris’ wedding after the bridesmaid speech.

For the majority of their Florida trip, “Snooki” was looking for her wine. In “The Lie Detector Test,” she finally gets ahold of the special shipment — a case of her Messy Mawma wine, which came out in November 2021. “Snooki” falls asleep cuddling her Messy Mawma and a pepperoni pizza in the episode like only reality TV royalty could.

That’s it for Jersey Shore: Family Vacation Season 5A. Stay tuned to Showbiz Cheat Sheet for updates on when the second half of the season will air.