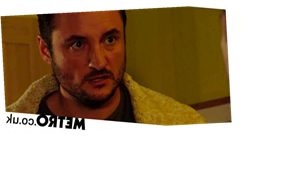 Things don’t look good for EastEnder’s Martin Fowler (James Bye) who will find himself entangled in a dangerous situation tonight, as Vinny Panesar (Shiv Jalota) attempts to rob the club.

The wheels are set in motion by a desperate Ruby Allen (Louisa Lytton) after she discovers someone has stolen her identity and used it to run up a list of fraudulent charges against her name.

Worried about the future of the club and struggling to recoup the money from the bank, she enlists Vinny to help out.

He agrees to her dicey plan, which sees him ‘break’ into the club to rob the full safe of money, which Ruby can then claim insurance on.

In dramatic scenes tonight, she’ll have a change of heart – but not before Vinny breaks into the club only to be greeted by Martin who is unaware of their plan, and ready to fight him off.

Could Martin find himself in the wrong place at the wrong time?

Is Martin Fowler leaving Emmerdale – does he die?

Actor James Bye has given no indication his character will bow out of the soap any time soon, in June saying he was ‘excited’ to see where his character’s storyline goes.

He told new! magazine: ‘I can’t wait to get back and see what EastEnders has in store.

‘I’m excited to see where that goes.’

However, even if he doesn’t shuffle off this mortal coil this evening, it looks as though he could take quite the bruising when he tries to intervene in the robbery.

After spotting Vinny, he’ll chase him into the Minute Mart where there will be ‘dangerous consequences’ according to official spoilers from the soap.

Tune in tonight to find out!

EastEnders continues tonight at 7:35pm on BBC One