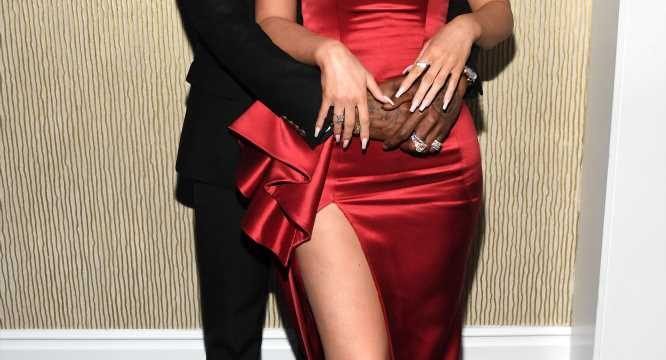 Travis Scott pulled out all the stops for Kylie Jenner on Mother’s Day this year.

On Monday, Jenner, 21, shared several photos and videos documenting her Sunday celebration with Scott, 28, and their 15-month-old daughter Stormi.

“Yesterday started with a 6am walk with this one,” the proud mom captioned a photo of Stormi in her pajamas outside.

“Then we started our day,” she continued, sharing a video of Stormi, sporting pigtails and a denim skirt, playing in a park.

Waiting for her back at home was a spectacular display of pink and purple flowers, arranged in giant vases alongside her pool. The pool was also covered with giant white balloons.

Then the mother-daughter duo took a dip, with Jenner sharing a sweet photo of herself kissing her baby girl in the pool.

That evening, Scott surprised Jenner with a beachside family dinner in Malibu.

“To a private dinner at my favorite place with my family,” she captioned a photo of Stormi staring out at the water. “Thank you @travisscott for the best Mother’s Day.”

And Scott clearly knows his girlfriend’s tastes well: Last but not least, the rapper gifted Jenner with a pink crocodile Hermès Birkin bag, valued at around $50,000.

Scott also wished Jenner and his own mom a happy Mother’s Day on Instagram.

“Happy Mother’s Day to the amazing Moms of the world,” he captioned a photo of each of them.

Jenner and Scott have been dating since they met at Coachella in April 2017. Though they recently went through a rough patch after the rapper was hit with cheating rumors, they appear to be back on track and better than ever.

While celebrating Scott’s 28th birthday last month, Jenner surprised her man with a Lamborghini after throwing him a lavish party.