How to Lose a Guy in 10 Days made even bigger stars out of Kate Hudson and Matthew McConaughey. The rom-com came out in 2003, and it’s still one of the most beloved of the genre.

While chasing a story, Hudson’s Andie Anderson went to great lengths to drive McConaughey’s Benjamin Barry away, who made a bet that he could make her fall in love with him quickly. Their motives made for some hilariously memorable scenes. And as it turns out, one of the movie’s most iconic clips was improvised by Hudson. 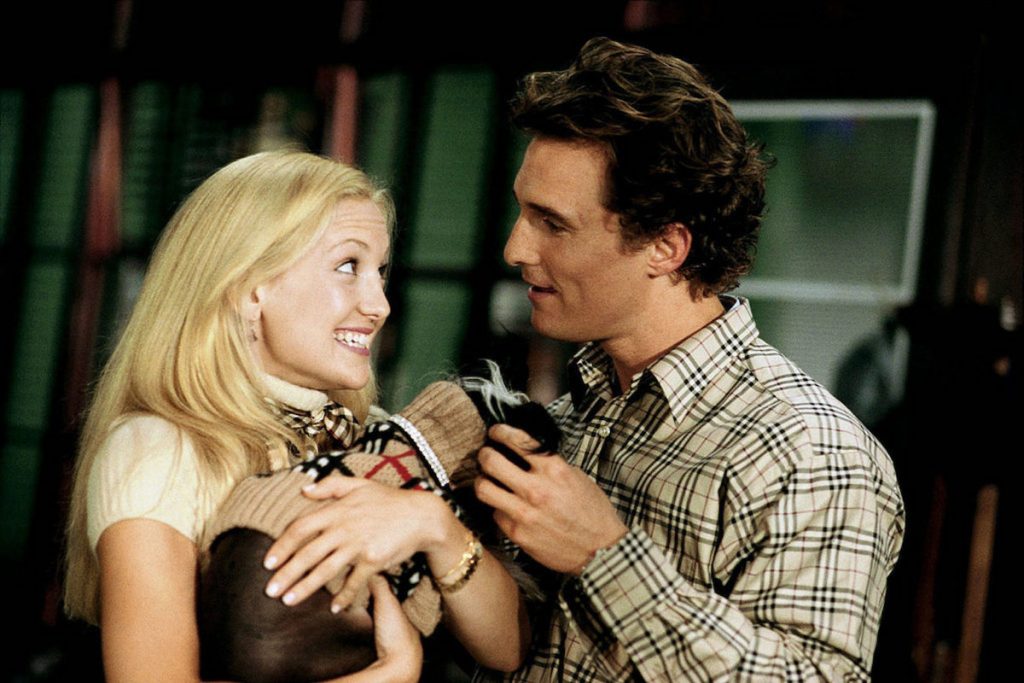 Producer Lynda Obst revealed in an interview with Entertainment Weekly that Hudson wasn’t the top choice for the role of Andie Anderson. Gwyneth Paltrow was originally tied to the project, and Mike Newell was supposed to direct. Newell wouldn’t get a start date on the calendar, however, and it made Paltrow leave the project to star in The View From the Top instead.

It was Hudson’s Golden Globe-winning performance in Almost Famous that landed her the role after Paltrow’s exit. But things weren’t all smooth sailing once Hudson signed on.

Kate Hudson and Matthew McConaughey’s age difference was a concern

Obst revealed there were concerns over Hudson and McConaughey’s 10-year age gap. Hudson was 23, and McConaughey was 33. Hudson intervened, bringing up her then-husband, Chris Robinson of The Black Crowes.

Once they had director Donald Petrie on board, things proceeded easily. McConaughey told BBC in a 2003 interview what he liked so much about the film and working with Hudson.

“She’s adorable. She’s very natural, loose, and free,” he said. “She’s smart… savvy is a better word. She gets the joke, whatever the joke may be. Not just the obvious joke — she gets that too — but she’ll laugh at the subplot that’s a little funnier than the obvious joke.”

“You’ve got a male and a female perspective, and a battle of the sexes at the same time. Good give and take. A lot of spontaneity. You’ll see a lot of scenes where you’ll feel like, ‘Oh, I bet that only happened once,’ and it’s true. It happened in one take. It’s a very alive process that can happen in a good romantic comedy. It’s not necessarily what’s being said, but the stuff between the lines that makes it sexy and fun.”

Those one-off takes were a frequent thing during filming. Petrie told BBC he would have his leading lady make up lines on the spot to produce a more organic reaction from McConaughey. He said:

“I’m very sneaky as a director. I’d go over to Kate and say, ‘OK, in this next take, don’t tell Matthew, but do this.’ She would do it. What’s great is that, because they’re such consummate professionals, they never break character. They just go with it. They just wing it. I never say ‘Cut!’ at the end of a scene.”

One of those improvised moments was the scene when Andie showers Ben in kisses after revealing the dog she got them, which is hilarious enough as it is, and then there’s the boys’ night scene. Most of Hudson’s lines in that memorable scene were made up on the spot by the actor.

She also improvised throwing the plate of veggies. The next time you’re watching this movie, keep an eye out for McConaughey’s reaction because they’re 100% genuine.

Petrie explained his reasoning behind the improv:

“I love a lot of improv because it’s all about the moment. There can be great chemistry, but if it happens at the water cooler when the cameras aren’t rolling, you’ve got nothing. It’s the chemistry that happens at that moment when it’s in focus. Actually, my favorite scene in the movie is when there are no words whatsoever. It’s when she wants him to seduce her so she can say no, and he’s determined not to seduce her so he won’t seem like the cad that he is. The cross purposes with no words really plays well.”

Hudson and McConaughey became rom-com staples thanks to this film. They reunited five years later in Fools Gold.