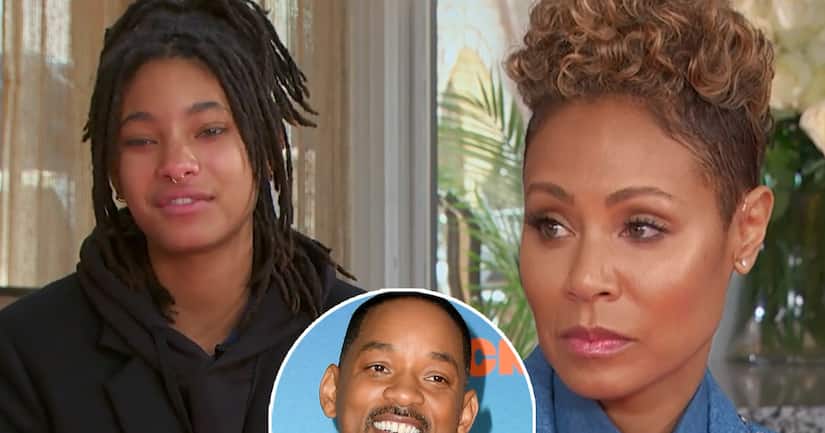 “Men when they see beautiful women in beautiful bodies, they react. It’s a primal thing, but when women see power it’s the same thing,” Jada says.

During Monday’s episode of "Red Table Talk," the ladies were joined by Steph Curry’s wife Ayesha, his mother, little sister and future sister-in-law and spoke about how they handle fangirls. While Will isn’t an NBA athlete, he is most certainly one of the biggest movie stars in the world.

When it comes to Jada dealing with Will’s female fans and co-stars she has received a lot of help from daughter Willow over the years, whether Jada wanted the assistance or not.

When Willow asked Jada how she dealt with the wild fans, she replied, "You know what? I really didn’t."

Jada then told a hilarious story which showed Willow’s tendency to keep other females away from Will, even from a young age.

"I remember when Willow was like five or six," Jada recalled. "And one of Will’s co-stars was in his trailer and she came in there. She jumped on her father’s lap and she looked at the co-star and she said, ‘My mother’s gonna be here very soon.’"

The "Girls Trip" star said when Will told her the story, she cracked up. "How is it that daughters, specifically, just tune in? Even to this day."

After sharing the funny ancedote, Jada, who has been married to Will for over two decades, got serious about the subject.

"There was only one or two times where I might have gotten a little hostile where I felt like people stepped over our boundary and they were disrespectful," Jada said. "Now we got an issue because I know who I am and more importantly, he knows who I am, right?"

The actress said you also have to have an "internal space of confidence." She added, "Men when they see beautiful women in beautiful bodies, they react. It’s a primal thing, but when women see power it’s the same thing. It’s not about gold digging. It’s a primal response. This guy can build a house. He can help my survival. It’s primal."

Jada continued, "I’ve had to put myself in Will’s shoes at times and go, ‘Woo! Woo! If I had all these pretty women throwing themselves at me, what would I do?!’ … When I really looked at it that way I really had to have more compassion and understanding."