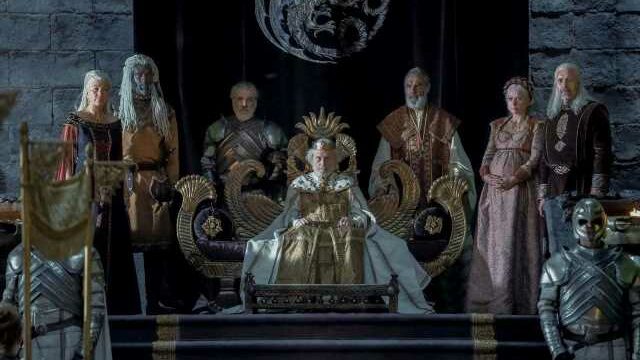 The prequel series of HBO’s hit ‘Game of Thrones’, which is set 200 years before the original show and details the battle of succession in the House Targaryen, aired its first episode on Sunday, August 21.

AceShowbiz -“House of the Dragon” premiered its first episode on Sunday, August 21. The prequel series of HBO’s hit “Game of Thrones” is set 200 years before the original show and details the battle of succession as House Targaryen attempts to maintain its place on the Iron Throne.

The episode opened with the “old king” Jaehaerys I being forced to choose a successor, given that his only biological sons had both died. Tension intensified when he opted for Prince Viserys Targaryen (Paddy Considine), his eldest male descendant, instead of choosing his eldest descendant, Princess Rhaenys Targaryen (Eve Best).

The story then jumped to year 9 of Viserys’s reign, 172 years before the birth of Rhaenyra’s ancestor, the future Queen Daenerys Targaryen. While the sexism society benefitted him before, it might be different this time as his only surviving child was his teenage daughter, Rhaenyra (Milly Alcock). That made his brother Daemon (Matt Smith) become his heir.

Despite that, Viserys wasn’t that worried since his wife Queen Aemma (Sian Brooke) was pregnant and he was confident that the baby was going to be a boy. Things went okay until it was time for Aemma to go into labor and Viserys held a tournament to announce to his people that Queen Aemma is in the process of giving birth. The labor, however, didn’t go well and Viserys was forced to choose between losing them both or save the baby.

Rather unsurprisingly, the King wanted to save the baby. He held his wife’s hand while the medical “maesters” butchered her in a violent, bloody Caesarean section. While she screamed, the camera switched to feature Criston Cole and and Daemon’s duel at the tournament. Daemon was forced to yield following a premature celebration of his victory.

Meanwhile, Queen Aemma eventually succumbed to her blood loss. Not stopping there, the baby died hours later. Viserys was too heartbroken as he was unable to command the dragons to burn his wife’s body. It was then Rhaenyra who must give the iconic command, saying, “Dracarys.”

Later, Otto Hightower (Rhys Ifans), the Hand of the King, held a meeting of the King’s small council to discuss succession. As he brought up the topic of Daemon’s temperament, some of the councilors agreed.

It prompted them to name some people whom they thought would fit the role of heir. Among them were Master of Ships Corlys Velaryon (Steve Toussaint)’s wife Rhaenys, which was dubbed the “Queen that Never Was” after Viserys bested her for the throne, and young Rhaenyra. The idea of being led by a Queen didn’t sit well with some men in the room. Meanwhile, Daemon secretly heard all of it while hiding in the room.

Pushing Viserys to cast Daemon aside apparently had always been Otto’s agenda. To further make his plan work, he sent Alicent Hightower (Emily Carey), his 15-year-old daughter, into the bedroom of the king to offer him some company. He told her young daughter to wear one of her mother’s more revealing dresses. While Viserys took a liking to Alicent, they did nothing but chat in his room.

Later, Otto told Viserys that Daemon rented out a brothel in an apparent celebration of the death of his nephew and rival for the Iron Throne. The King was beyond livid when he found out that his brother called his dead son “the heir for a day,” so he stripped Daemon of his role as heir and sent him away.

Viserys then called Rhaenyra to the Red Keep. She was asked to stare at the skull of the Targaryen’s greatest dragon in order to pass his tests about leadership as he planned to name her as his new heir. During the moment, he also told her about a prophecy their ancestor Aegon saw a hundred years ago. It was about the end of mankind which started with a great and terrible winter.

Toward the end of the episode, Viserys named Rhaenyra his heir. All the lords of Westeros, including a Baratheon and a Stark, bent the knee and swore fealty to her.