At the start of Monday night’s Q&A, host Tony Jones described it as the “last-chance election saloon” and advised: “Just have a drink.”

He didn’t need to ask twice. Or even once, let’s be frank.

As the nation staggers into the final four days of a painful election campaign, Q&A on its own was never going to be the tonic required to steel the nerves for whatever mayhem is to come in the run to Saturday. Upwards of 2 million of us have already voted, and these lucky folk are no doubt out on the turps dancing the Macarena. 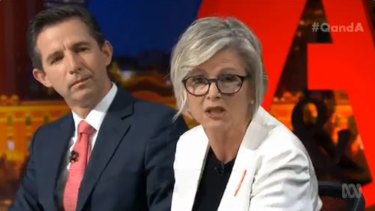 The rest of us were presented with a pre-election panel that promised what it delivered: an-hour-and-a-bit of pure political palaver.

With Prime Minister Scott Morrison having declined a solo appearance to match Bill Shorten’s turn a week prior, we were left with four politicians comprising decent political balance – someone from the government (Minister Simon Birmingham); someone from Labor (deputy leader Tanya Plibersek); someone from the Greens (leader Richard Di Natale); and an independent hopeful for the seat of Indi, Helen Haines.

No one was here to make news. Everyone was here to avoid last-minute disaster. No one said anything they hadn’t said before. Five days out from voting, it was ever going to be thus.

The questioner who wanted to know if the late-entry Coalition promise of a new scheme to help first-home buyers was irresponsible was never going to get more from Simon Birmingham than a promise that much research had been done, and an assurance that the government was putting its hopes in “the lived experience in New Zealand”.

On this peculiar pledge he was immovable and impenetrable. The government’s shifting devotion to the shining example of New Zealand will never cease to be a thing of wonder.

The questioner who demanded of Plibersek that she commit to an immediate increase in the Newstart allowance was never going to get more than the promise that Newstart would be reviewed. Nor was Jones, who managed only to get variations on the notion that Plibersek, as she said, "couldn’t live on $39 a day".

Plibersek: “I don’t know how to say it more clearly … I can’t give you a better answer than that it has to be methodical. I agree it would be very, very difficult to live on Newstart.”

There followed a brief moment of unthinking daring from Birmingham, of whom Jones had declared: “Can I just say, you sound like you’re in opposition.”

When also reminded that John Howard, the only former Liberal prime minister fit for wider public consumption in this campaign, had criticised the Newstart “freeze”, Birmingham said: “He is wrong.”

And you can bet he’ll be hearing about that today.

This soon gave rise to some army-bargy, as Di Natale was brought into the debate.

Birmingham’s wildly unpredictable view? That the Greens would dictate Labor policy on a Newstart increase.

Di Natale: “Absolutely. Absolutely we will. You’re damn right about that.”

Plibersek: “I don’t think Richard will be determining Labor policy.” 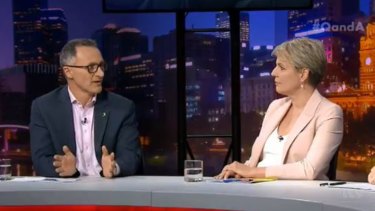 Birmingham: “Of course he will … they always do.”

And so it went on.

Birmingham again accused Labor of oiling up for a post-election liaison with the Greens, immediately after Plibersek had said nothing of the sort.

Jones to Birmingham: “Can I suggest that is absolutely putting words into someone’s mouth? As the moderator, I heard what she said and it wasn’t that.”

Plibersek, reminding Birmingham that there were actually cameras and microphones in the vicinity, said: “We’re all in the same room, Simon!”

Then came a contretemps about protection of the Great Barrier Reef. You will be surprised to learn Labor and the Greens accuse the Coalition of flogging off the reef’s future to a dodgy overseer, while the government presents itself as the nation’s premier worshipper of coral.

Jones pulled up the Minister: “Do you need to protect it, Simon, because Scott Morrison says in his campaign launch, ‘we saved the Great Barrier Reef already’?

Birmingham accused the host of misquoting the Prime Minister.

The host responded by … quoting the Prime Minister.

Jones: “So you haven’t saved the Great Barrier Reef, the Prime Minister didn’t get that quite right?”

Birmingham: “I think you’re being selective in your quote there.”

It was not the only time the pressing issue of climate change came up. And it was that issue – and some scepticism about the Coalition’s commitment to dealing with it – that helped deliver the line of the night.

In his closing statement, Birmingham declared: “We’re not promising the Earth…”

On that there is general agreement.