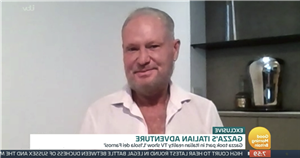 Gazza let slip a curse word during a live interview via video link, as he was discussing his shoulder injury on 'Celebrity Island' – which has been dubbed the Italian version of I'm a Celebrity… Get Me Out of Here.

"I felt my shoulder go, and I thought sh*t, just pop the ball back in and I'll be okay," Paul explained as he described one of the trials he was set to compete in.

Adil jumped in to say: "Before we carry on Gazza, I'm gonna apologise on your behalf. A bit of foul language we heard there, I know it was purely accidental on your part."

Adil had to quickly say: "All right, easy! Easy, easy!"

As the presenters moved swiftly on to discuss Gazza's legendary naked sunbathing, Susanna laughed: "We had to censor that as well!"

It wasn't Gazza's only near miss during the interview – despite censoring himself, when discussing his encouraging a fellow celeb to take part in a trial, he said he "couldn't say" what he'd actually said, but that it was close to "F off".

Paul made waves on the Italian reality show for his naked sunbathing and rusty Italian skills, but had to be rushed to hospital for his dislocated shoulder after injuring it during a trial.

While completing an assault course along with his teammates, Paul was seen gripping his arm in apparent agony, as someone asked: "What's happened to Paul, he looks in trouble?"

At the time, presenter Massimiliano Rosolino told viewers: "He hurt his shoulder. The doctor is there and he helped him right away. I don't know how he is but we have an extraordinary team."

And later it was confirmed that Paul was "with the medics" but "not seriously hurt".

Later in the interview, Susanna was desperate to know if Gazza had his sights set on the UK version of I'm a Celeb.

"You would be fantastic on I'm a Celebrity… Get Me Out of Here. Is that the obvious next thing to do for you?" she grilled the footie legend.

"Well, I know Harry [Redknapp] did fantastic out there," Paul said. "But obviously I suffer a little bit from claustrophobia and snakes – I'm not too scared about flying now after the helicopter flight. I've had a few interviews now for that show.

"It's something I would look forward to doing," he admitted. "But I'll leave that to my manager!"

This is a live TV story and is constantly being updated.

Please refresh the page regularly to get the latest TV updates.

TV & Showbiz reporters are working to source the latest information, reaction, pictures and video related to this story.

Or like our Daily Star Showbiz Facebook page to get the day's biggest stories, and have your say on them.

Why not also subscribe to receive our regular Daily Star showbiz newsletters?

You can do this on this page by simply entering your email address above and hitting 'subscribe'.

Download the Daily Star app for flash alerts on the biggest stories of the day, so you don't miss out.

Why not also subscribe to receive our regular Daily Star news bulletins? You can do this on this page by simply entering your email address above and hitting 'subscribe'.