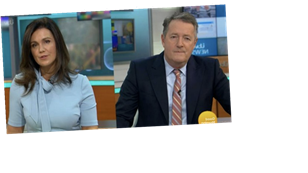 The 100 year old icon, who shot to fame after he raised more than £33million for the NHS, passed away after he was hospitalised with coronavirus and pneumonia.

Susanna, 50, and Piers, 55, hosted a GMB special to remember Sir Tom for all his incredible achievements throughout the pandemic.

Susanna said: “Today we are paying special tribute to a national hero.”

Piers added: “He was a shining light in the darkest of times… [It is] a very sad day today, to lose a man of that stature… he represented the very best of this country.

“The decency, the courage, the determination, the resilience, a man who had come through World War II serving his country. He risked death numerous times and that instilled in him this force for positivity, even in the darkest times.”

Piers and Susanna also slammed the internet trolls who criticised the family for visiting him in hospital during his last hours and Sir Tom’s trip to Barbados, which he took when he was under Tier 2 restrictions.

He said: “They had a wonderful family trip… and I just want to say again, we discussed this yesterday about the trolls…

“I hope [the trolls] can live with themselves because it was despicable… the idea that people think it’s ok to abuse the likes of Sir Tom.”

The pair also spoke with Amanda Holden, Carol Vorderman, Nick Knowles and Dame Vera Lynn’s daughter Virginia Lewis-Jones throughout the show, who all paid their tributes to Sir Tom.

Former Countdown star Carol, 60, said: “I think he deserves a stone in Westminster Abbey because I think he embodies this whole terrible pandemic that we are all living through, so many have lost their grandmas and their grandads, their fathers and their mothers, their sisters, their brothers and I think he embodies that and I think we loved him. I think we have genuinely fallen in love with Captain Sir Tom.”

While Amanda, 49, admitted she took the news of Sir Tom’s death “quite personally”.

Speaking from her Heart Radio studios, she said: “I’m glad we are celebrating his strength and his legacy but [also] his sense of humour, because it’s very British. It’s his sense of humour and his selflessness, again it’s that generation of people that have that spirit.”

Fans of the show were left in tears at the emotional tributes pouring in and shared their emotion on Twitter.

One wrote: “The Captain Sir Tom tribute on #gmb is a lovely thing.

“I’m so pleased Sir Tom had a lovely holiday with his family, he did more in the last year of his life than most of us will do in our entire time on this earth. I feel like I’ve lost a member of my family #RIPCaptainTom”.

While a third added: “#GMB lovely tribute to Sir Tom on GMB. Showing beautiful clips and how he was such a funny light hearted gentleman with only ever good intentions for out nation.. Its lovely”.