Unlike Easter last year, we’re actually going to be able to go to the movies this weekend.

With drive-ins solely operating a year ago in the U.S. and Canada as the main means of moviegoing, Universal released their DreamWorks Animation title Trolls World Tour into homes on PVOD for the rental price of $19.99 (over 48 hours) and grabbed whatever theaters they could. Reports figured that Uni cleared $100M from Trolls World Tour in the title’s first 19 days. There was a lot of commotion from exhibition about Uni’s theatrical window-busting, and going-day-and-date, but in hindsight, it was a necessary pivot with close to all indoor movie theaters closed down.

Even though Warner Bros. has the Legendary title Godzilla vs. Kong on its streaming service HBO Max (in its first 31 days) and in theaters starting this Wednesday, the movie is set to deliver a sum of cash to exhibition as they look for a comeback, especially with Los Angeles and New York reopened. Godzilla vs. Kong set pandemic offshore opening records for a Hollywood movie this past weekend with $123M, and the Legendary monster mash is expected to deliver the biggest domestic debut for a major studio movie during this span (since late-March 2020) with an estimated $20M-$30M over Wednesday through Sunday.

At the very least, the Adam Wingard-directed monster tumble, Legendary’s fourth, will easily eclipse the Christmas weekend 2020 stateside start of Warner Bros.’ Wonder Woman 1984‘s $16.7M. Already, I’m told by sources that Godzilla vs. Kong has booked over 10K private screening watch parties at theaters in the U.S., a number that bests the bookings of Wonder Woman 1984 which held the previous high for such RSVPs. Given how most movie theaters are operating on shorter schedules mid-week, Godzilla vs. Kong is looking to be at its zenith by Friday, which is when No. 2 circuit Regal returns after a five month closure.

While Godzilla vs. Kong‘s U.S. start is low compared to the pre-pandemic debuts of its brethren Godzilla ($93.1M), Kong: Skull Island ($61M) and Godzilla: King of the Monsters ($47.7M), understand that in a continued broken exhibition landscape with only 3,1K out of 5,8K theaters re-opened, the projection for Godzilla vs. Kong underscores people’s yearnings to head back to cinemas.

As we’ve overwritten, the return of moviegoing will be gradual, and not swift. Godzilla vs. Kong is but one increment. While the movie is booked at 3k theaters or 6K screens, the most for any wide release during the pandemic after Tenet‘s 2,810 and WW1984‘s 2,151, if one looks under the hood, that number comes with plenty of asterisks, meaning in regards to B.O. accelerators and decelerators.

For example, most of Canada’s cinemas in populated areas aren’t open, and in response to that Godzilla vs. Kong will be available on PVOD in the Great White North, in particular on Cineplex’s online store. 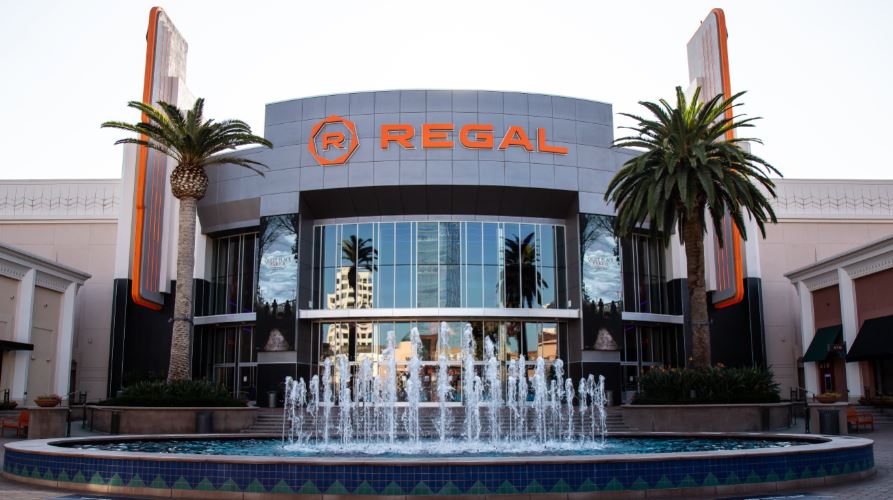 Regal, the No. 2 chain in the U.S., is only reopening 22 locations out of its 542 count nationwide this weekend, but sources tell me it’s their biggest revenue generators. Those locations include LA Live downtown, the Irvine Spectrum, Valencia Screen X in Santa Clarita, CA; Union Square in NYC, the Greenway Grand and MarqE in Houston, Mira Mesa in San Diego, and Hacienda in San Francisco among others. Regal will open another swath for New Line’s Mortal Kombat on April 16.

In regards to when L.A. moves to 50% capacity for indoor cinemas, we’ll hopefully know more today, however, the expectation is that benchmark won’t be notched until after Easter weekend. The only exception to that is if California hits 4 million vaccinations in disadvantaged communities. If that happens, the state will elevate to the orange tier whenever the mark is crossed, which could be before this weekend.

On the upside for Warner Bros, they’ll have full control of Imax and PLFs for the month of April between Godzilla vs. Kong and Mortal Kombat. Of the former’s theater count, 285 sites are Imax auditoriums, 650 are PLF screens, over 700 are 3D, with another 150 drive-ins.

Other positive drivers for Godzilla vs. Kong: The sequel has the best Rotten Tomatoes score out of the four Legendary monster movies with a current 80% Certified fresh, besting Godzilla‘s 76% Fresh, Kong: Skull Island‘s 75% fresh and 2019’s Godzilla: King of the Monsters‘ awful 42% rotten.

In total, including this past weekend, Legendary’s monster franchise counts $1.6 billion at the global box office.