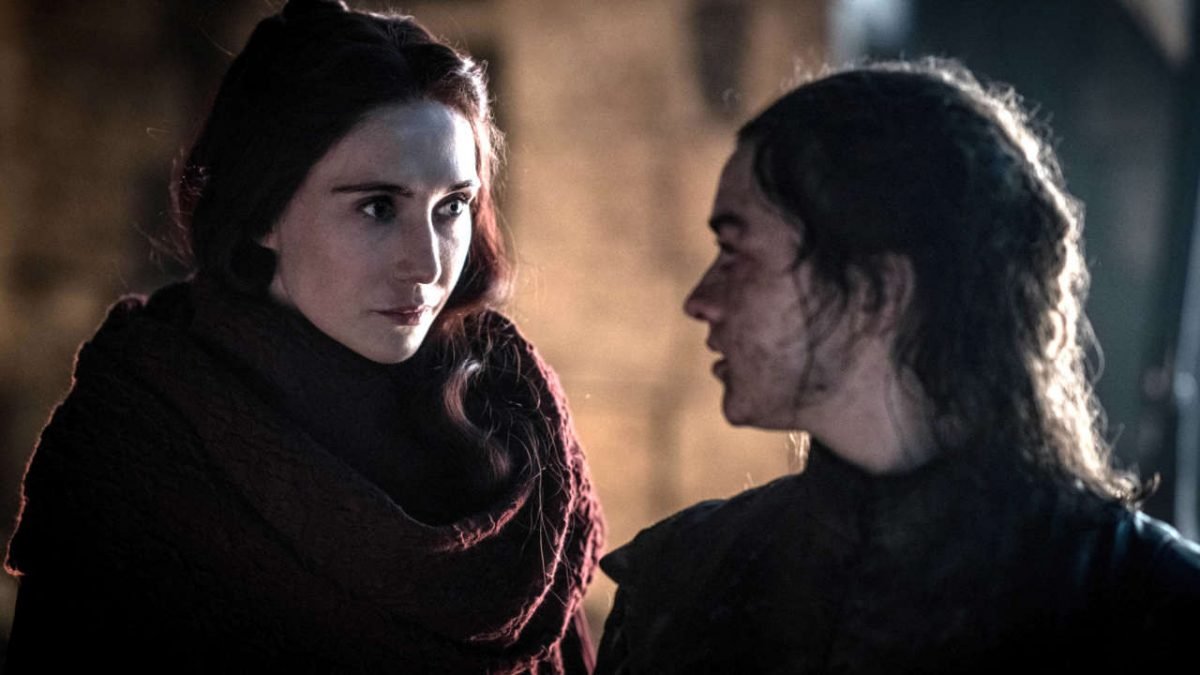 Note: This post contains a bunch of spoilers for Episode 3 of Game of Thrones Season 8, The Long Night. We suggest you watch the episode first before reading further. If you have seen it, check out our review of Episode 3 and explanation of why it’s really dumb to say Arya Stark is a Mary Sue. You might also be wondering what conversation unfolded between Melisandre and Arya back in Season 3; read on for a full recap.

The Red Woman Melisandre has been wandering Westeros for most of the run of Game of Thrones, trying to prepare people for the Great War–the final battle between the living and the dead. When the Night’s Watch was trying to convince the lords of Westeros to send help to the Wall, Melisandre was one of the only people who believed in the threat immediately. She was the one who convinced Stannis Baratheon to help the Night’s Watch defeat the Wildlings, to protect the realms of men from the army of the dead.

When the army of the dead finally reached Winterfell in Episode 3 of Game of Thrones Season 8, The Long Night, Melisandre had already had a big influence on everything that happened leading to that point. She resurrected Jon Snow after he was betrayed by his Night’s Watch brothers; she led Stannis to his doom fighting the Boltons at Winterfell, which led Davos to join up with Jon; and she suggested Daenerys meet with Jon and hear what he had to say about the threat of the Night King. And when Melisandre ran into Arya Stark during the battle, she had an influence on her, as well–one that recalled their earlier meeting, way back in Season 3.

If you don’t remember the interaction between Arya and the Red Woman, it’s because it was pretty fleeting. It happened back in Season 3, when Arya, Gendry, and Hot Pie were nabbed by the Brotherhood Without Banners. Gendry had decided to stay with the Brotherhood and smith for them, but that changed when Melisandre caught up with them.

In exchange for the money they needed to feed and arm themselves, the Brotherhood–led by the moral outlaw Beric Dondarrion–sold Gendry to the Red Woman. She intended to use his king’s blood–Gendry is King Robert Baratheon’s bastard–for her spells to help Stannis defeat his enemies and take the Iron Throne.

Arya confronted Melisandre briefly as she and Stannis’s men were carting Gendry away.

Melisandre, for her part, was arrested by seeing Arya and immediately did her magic vision schtick.

“I see a darkness in you,” Melisandre replied. “And in that darkness, eyes staring back at me. Brown eyes, blue eyes, green eyes. Eyes you’ll shut forever. We will meet again.”

It wasn’t clear what Melisandre was foreseeing during the interaction, other than the fact that Arya was going to go on to become a frighteningly effective killer. “Brown eyes, blue eyes, green eyes” seemed to refer to the many victims she’s racked up over the years. But then Arya found Melisandre at Winterfell, and both instantly recalled their last meeting and how Melisandre said they would meet again.

“You said I’d shut many eyes forever,” Ayra said in their final meeting. “You were right about that too.”

“Brown eyes, green eyes–and blue eyes,” Melisandre answered. The two locked eyes as Arya realized what Melisandre meant in that moment: She was referring to the blue eyes of the White Walkers, and it was that revelation that sent Arya to the godswood.

While it seems like Melisandre’s prophecy for Arya was realized once she took down the Night King, we know Arya still has scores to settle–her kill list still includes Cersei Lannister and the Mountain. There’s a theory that speculates that the rest of Melisandre’s prophecy refers to the Lannister queen, who has green eyes (they’re even called “emerald green” in the A Song of Ice and Fire novels on which Game of Thrones is based). Now that the focus of the show is returning to the war for the Iron Throne with the final three episodes of the series, Arya might finally get her chance to cross those final names off her list.

We’ve got even more Game of Thrones coverage in Season 8. Check out a rundown of who has died this season, a list of the Easter eggs and references you might have missed in The Long Night, and some theories for the rest of Season 8. We can also catch you up on what happened to Jon Snow’s dragon, Rhaegal, and his direwolf, Ghost–who both made it out of Episode 3.