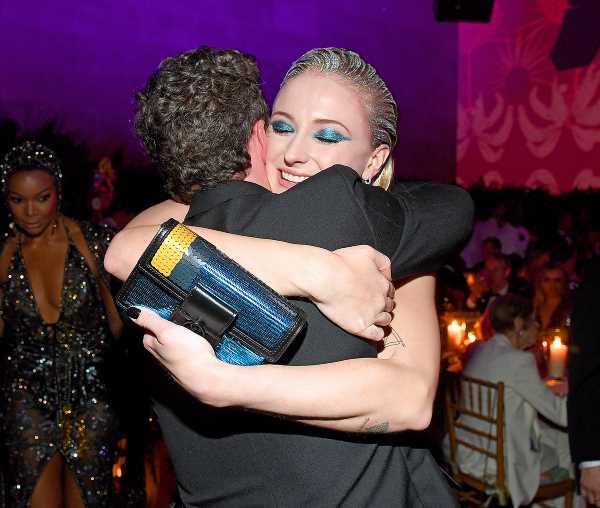 Sophie Turner and Richard Madden had a Game of Thrones family reunion at Monday’s 2019 Met Gala.

The two actors — who played siblings Sansa Stark and Robb Stark on the HBO series — ran into one another at the annual fashion event, embracing in a sweet hug while inside the Metropolitan Museum of Art that was captured by photographers.

Both were all smiles as they held one another close, in a squeeze that even Game of Thrones scribe George R. R. Martin couldn’t have crafted (Spoiler alert, but Madden’s character was famously killed off the fantasy series back in season 3 during the infamous red wedding).

The former costars and friends looked stylish, too, standing out in a sea of over-the-top fashion.

Turner, 23, leaned into this year’s theme of “Camp: Notes on Fashion” with a colorful sequin embellished custom Louis Vuitton jumpsuit. She wore her blonde locks sleeked back, with silver glitter giving them a touch of sparkle.

Their reunion came a day after the airing of the fourth episode of Game of Throne‘s final season. The hit series, which premiered on April 17, 2011, is scheduled to conclude for good on May 19 — meaning only two episodes remain.

Meanwhile, Turner and Madden weren’t the only ones reuniting at the Met Gala.

This year’s ball was a family affair for Turner, who attended the event with husband Joe Jonas, 29, in what was their first red carpet appearance since the two tied the knot at a Las Vegas chapel following the Billboard Music Awards on May 1.

Joe’s younger brother Nick Jonas, 26, was also in attendance with his wife Priyanka Chopra, 36, after they got married themselves in multiple extravagant ceremonies and receptions in India six months ago.

It was a “full-circle” moment for Nick and Chopra. A little over a year before the two began dating in 2018, the actress famously attended the 2017 Met Gala with the Jonas Brother because they both worn designs by Ralph Lauren.

This time, both Nick and Priyanka — like Madden — went for Dior.

She turned heads in a Dior Haute Couture silver gown with colorful feathered ruffles and a matching cape. The dress also featured a thigh-high slit, underneath which the actress wore sheer silver polka-dotted tights. Chopra topped off her look with a spiked silver crown and Chopard jewels.

“Joe has his own style. But yes, they like to coordinate,” Turner’s stylist Kate Young told PEOPLE of the look. “They tend to do that.”

As for Turner’s look? “Her body looks insane in it!” Young said. “She kind of looks like a superhero. She’s not so much a gown person, though she wears them on occasion, so a jumpsuit look suits her.”