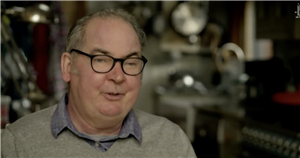 Friday Night Dinner fans have shared their heartbreak as Paul Ritter's appearance on the special anniversary episode aired on Friday 28 May.

Late actor Paul appeared on the special episode, titled Friday Night Dinner: 10 Years and a Lovely Bit of Squirrel, to celebrate ten years of the show.

Paul tragically passed away following a battle with a brain tumour at age 54 in April.

Shortly before his tragic death, Paul made his final appearance on screen for the special, as it was explained he was "very unwell" during filming for the one-off doc.

Paul, who played Martin Goodman on the series, explained how much he loved playing the role.

He said: "I'd be nothing without him, no seriously. I mean it was the great career gift.

"In terms of interesting parts he's been absolutely everything to me and I have loved playing him."

As Paul's final on-screen appearance aired on screen, viewers shared their heartache over his tragic death and praised him for his appearance on the special.

One wrote: "seeing paul ritter look so ill genuinely breaks my heart. he wanted so badly to take part in the documentary, about a show he loved so much. rest easy Paul, we’ll always remember you".

Another added: "Heartbreaking to think we’ll never get to see the brilliance of Paul Ritter on our screens again. Honestly sat sobbing hearing him talking about how much he loved Friday Night Dinner".

While a third wrote: "Despite suffering from his illness, just how wonderful was it to see Paul Ritter light up when talking about his time on #FridayNightDinner?

"Such a brilliant man and a wonderful actor. Martin will stay with everyone, forever."

A fourth added: "Last nights #FridayNightDinner was a beautiful tribute to Paul Ritter. I laughed and cried. Such a great series and amazing cast".

Paul's former cast mate Tamsin Greig, who played Martin's wife Jackie, paid tribute to the actor on the special episode of the show.

Speaking in a clip filmed after Paul's passing Tamsin, who recently revealed she attempted to persuade Paul not to take part in the special due to his ill health, said: "It is difficult to believe it's 10 years since the transmission of the first episode of Friday Night Dinner. But, to celebrate that momentous occasion myself, members of the cast and a few surprise guests have come together to make this documentary.

"I'm sure you know that very recently we lost our dear and most cherished friend Paul Ritter, who plays Martin Goodman on Friday Night Dinner."

Holding back tears Tamsin continued: "We all miss him terribly. He was an incredible actor, a true friend and a lovely human being. Sadly, at the time of making the documentary Paul was pretty unwell."

She added: "But it is testament to Paul's courage, generosity and dignity and complete lack of vanity that he wanted to participate in the documentary to do an interview and to really celebrate this little world."