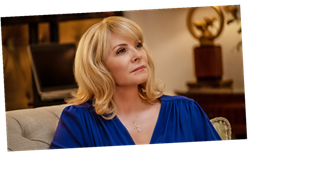 Kim Cattrall is finding out her late husband’s secret life in the worst way possible.

The Sex and the City vet stars in Fox’s upcoming soap, Filthy Rich, which follows the uber-wealthy Southern family, the Monreauxes, who face an insurmountable loss when its patriarch, Eugene (Gerald McRaney), the creator of a popular and successful Christian television network, Sunshine, dies in a plane crash. His wife and partner, Margaret (Cattrall), and the family discover in the aftermath of his death that he secretly fathered several children, all of whom are written into his will, threatening their family name and fortune.

In ET’s exclusive sneak peek from the series premiere, it’s the exact moment Margaret’s life is turned upside down forever.

“How long are you going to keep his will from me?” Margaret asks lawyer Franklin Lee (Steve Harris), whom the family hire to handle Eugene’s legal affairs.

“Margaret, I wanted you to get back on air first,” Franklin stalls. “So I could continue living a lie,” she interrupts.

“Eugene was lying, not you,” he corrects her. But she’s not buying it, saying that the family belongs “to the audience.”

“We are one. His lie is my lie,” Margaret concedes. “When I think about all the crap I put up with to carry on with our mission — keeping this family together, keeping the lid screwed tight on my honey jar while he cheated all along? And you knew.”

“And you can’t say you didn’t,” Franklin says. “Come on, give me a break, Margaret.” The truth in his words strike at her core and she starts to break down, admitting that she knew about the one-night stands. “But I ain’t ever dreamed there was a child.”

Little does she know, it’s not just one secret child, but three. Watch ET’s exclusive clip below.

In a recent interview with Haute Living, Cattrall compared her Sex and the City character, Samantha, to Margaret.

“I don’t see Samantha in [Margaret at all],” the 64-year-old actress said. “I don’t think she has the swagger of Samantha. She doesn’t use sexuality in any shape or form. Samantha’s was a sexual power alley, and that’s not a card that Margaret uses. She’s not comfortable with it. All of her energy goes into her work and her family. There’s a confidence, but she is not a cougar.”

Cattrall said playing Margaret has taught her something about herself in the process.

“I think taking on Margaret Monreaux has given me an opportunity to explore a lot of things that reflect not just where I am [in life], but a different way of dealing with my fears and frailties,” she said. “Not just emotionally, but physically as well. It is a machine, the body, and maintenance becomes more of a reality. None of these things are particularly enjoyable or sexy or luxurious, but they are real.”