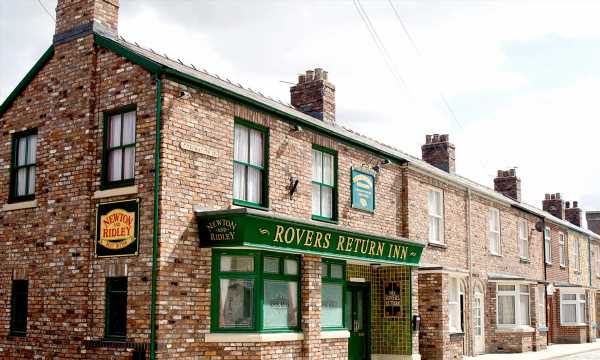 Asan was fired from Emmerdale on Wednesday after throwing punches at Hollyoaks actor Jamie Lomas at the TV Choice Awards that took place on Monday night. After the incident, a spokeswoman said: "ITV executives have met with him this morning and as a consequence Asan's contract has been terminated with immediate effect." Asan is said to have also threatened to kill Jamie.

The actor released a statement of his own, and apologised for his behaviour: "My behaviour at the TV Choice Awards was completely unacceptable. I sincerely apologise to everybody who has been affected especially Jamie Lomas, the whole Emmerdale team, our audience, ITV, my family, and the organisers of the TV Choice Awards. I am devastated, accept full responsibility for my actions and I am determined to learn from this."

Everybody remembers Leslie for his infamous portrayal of Dirty Den on EastEnders, but even his popularity wasn't enough to save him when it emerged that the actor had exposed himself on webcam. Although producers of the soap didn't address the claims directly, a BBC spokesperson did say at the time in 2004: "All I can say is the stories are true, that he's leaving." Leslie had made a return to the show in 2003 after a 14-year absence. Sadly, the actor passed away last year.

Shila played Aiesha Richard on Emmerdale, but was fired after a series of offensive tweets sent from her account in 2013 resurfaced. Shila was dropped from the soap in April, and at the time an Emmerdale spokeswoman said: As a consequence of [past] social media posts, Shila Iqbal has left her role as Aiesha Richards on Emmerdale. The programme took the decision not to renew her contract as soon as these posts were brought to the company’s attention."

Shila soon deleted her Twitter account and apologised for her previous lack of judgement, saying: "I am terribly sorry and take full responsibility for my use of such inappropriate language. I have paid the price and can no longer continue the job I loved the most at Emmerdale."

Luke is best-known for playing Daz Eden in Emmerdale, however he was booted off the show in 2009 after being found guilty of grievous bodily harm. Luke attacked a teenager and broke their jaw and ITV responded by saying that it had no choice but to let the actor go. In a statement a spokesperson for the channel said: "As Luke has pleaded guilty to the serious charge of GBH and we cannot condone criminal behaviour, we have met with Luke and his agent to explain his contract with Emmerdale will be terminated. Luke regrets his behaviour and understands this situation."

Melissa played EastEnders' Lucy Beal for six years, but was fired in 2010 after pictures of the then 17-year-old partying surfaced online. At the time, Melissa spoke out about her departure on her personal website, writing: "Sat in the green room at work, my last day very emotional! I was a naughty girl outside of work, well that's what they have sacked me for, pathetic!" BBC bosses clearly didn't think so, and even gave the young actress three warnings before pulling the plug.

Remember Hollyoaks' aspiring journalist Michaela McQueen? Hollie-Jay played the role, but notoriously got into an argument with one of the soap's producers and was consequently let go. In 2010 the 30-year-old was quickly written out of the show following a series of rows with show bosses, and even took to Twitter to reveal that she was desperate to leave the soap. At the time the star tweeted: "This past four years have been incredible but I think it's time to find myself again! I'm officially leaving Hollyoaks in the next 6 months!" It seems that her wish was Hollyoaks' command!

Much less dramatically, Davinia was fired from Hollyoaks many years before in 1998 for bad time-keeping. Davinia, however, denied that her lack of punctuality was the reason for her departure, telling Digital Spy that: "Well do you know what, that's what they say I got 'sacked' for, but I think I fell out with the producer. She let me film my final scenes, all the front-of-head shots, so I'd already signed a contract saying I was leaving. So my final scenes I shot, and then they got an extra in to film the back-of-head shots and they rang up the press and said: 'Oh, we sacked her'. And just got the last bit of mileage out of me PR-wise. It didn't do me any favours at all."

The mum-of-four has since returned to Hollyoaks, and so far she's been on time every day!

Peter was fired from Coronation Street after a child abuse scandal that he was involved in came to light. Peter played Len Fairclough on the soap, and was accused in 1983 and written out of the show shortly afterwards, with his character dying of heart attack. Peter – who always denied abuse claims – passed away in 2002.

Stephanie – who played Sinead O'Connor on Hollyoaks – was fired after arriving on set intoxicated in 2015, however has since made a return to the show. On Wednesday it was announced that Sinead would be taking a break from her role on the popular soap after splitting from her co-star Owen Warner.

Katie's contract termination came before she'd even got in front of the camera! Originally set to play Sarah Platt's 14-year-old daughter Bethany, Katie pretended that she was 19 in order to secure the role, when she was in fact 25. As soon as this information came to light, Katie's contract was torn up and the role went to Lucy Fallon. They don't miss a thing, these producers!

Marc played Sharif Nazir in Corrie from 2014 to 2016, when he was fired for a series of hateful, anti-India tweets. His removal was swift, and in a statement on the matter ITV said: "We are deeply shocked by the entirely unacceptable, racially offensive comments made on Twitter by Marc Anwar. We have talked to Marc and, as a consequence of his comments, he will not be returning to Coronation Street with immediate effect."

At the time, Marc responded with an apology video. The disgraced star was remorseful, telling his fans: "I would like to offer my sincerest apologies to anyone that I may have offended with my tweets on Friday evening and especially people from India. This was never my intention and the language was unacceptable. I feel that I have let a lot of people down, my family, my friends and my former colleagues. This I very sincerely apologise for." Marc's video has since been deleted.

Daniella became a household name playing Sam Mitchell in EastEnders, but it wasn't Albert Square that she was fired from. The 45-year-old actress also made an appearance in Hollyoaks as Trudy Ryan. Trudy first appeared in Chester in 2013 and was tipped to return in 2015, but before she had filmed even a single scene, Daniella was axed from the show for "breaching her contract". At the time, a spokesperson for Hollyoaks told The Daily Mail: "Danniella breached her contract and it was terminated last week. She will not be filming Hollyoaks."

But according to Daniella, the decision not to return to Hollyoaks was hers. The actress said that she chose not to return to Liverpool – where the soap is filmed – after learning that her abusive ex-boyfriend Tom Richards had recently moved to the area.

You'll no doubt remember Bruce for his portrayal of Les Battersby in Coronation Street. Bruce might have been a fan favourite on camera, but behind-the-scenes Bruce was loose-lipped, often slating fellow cast members and even leaking plotlines. The 54-year-old was kicked out of Weatherfield after he downed six pints of Guinness and let slip the outcome of the Tracey Barlow murder trial – whoops! In a statement ITV confirmed that "Bruce Jones will not be returning to his role of Les Battersby on Coronation Street. Bruce's current contract will not be renewed when it ends in September of this year. The character of Les will not be seen back on screen."

Chris is best known for his portrayal of Tommy Duckworth on the Corrie cobbles, but despite finding fame as an actor, the 32-year-old decided to also try his hand at rapping. His music career didn't go too well, and the soap star was fired from Coronation Street after sharing a video of himself rapping about rape and violence. The incident occurred in 2013, and at the time Corrie bosses said that they had "no choice" but to send Chris packing.

In Walford, Ricky excellently portrayed Arthur 'Fatboy' Chubb, but his time on the BBC soap came to an abrupt end after he was allegedly caught smoking cannabis while in the nude on Skype. The 32-year-old frequented the square for five years and was an EastEnders favourite – but his representation was so badly damaged by the incident that show producers had no choice but to kill the star off. A spokesman for the BBC show said: "We can confirm Ricky is leaving. We wish him all the best."