It feels like one can simply copy and paste the same story every year. “This year’s Emmys ceremony had some wins but ultimately still reminds us that little has changed when it comes to championing diverse talent.” The deck was already stacked against the Television Academy the minute the overwhelmingly white nominations were announced.

Some categories, like Supporting Actress in an Anthology Series or Best Actor in a Drama, even had multiple nominees from the same show; four of the seven slots in the former category were taken up by actresses from “The White Lotus.” It was proof of a core problem when it comes to issues of nominee diversity: not only were the voters not looking at different actors for nominations, they also weren’t watching nearly as much television to begin with, preferring instead to stick with a few popular shows as opposed to spreading the love.

To kick off the ceremony, Oprah reminded the audience how hard it is to win an Emmy, telling those in the room there was a 300 million to one chance, and that number felt even higher if you were a minority. At times, it felt like the Academy anticipated a lack of POC winners and peppered the presenting pool with numerous actors of color, as well as dedicating montages to shows that audiences loved, but that no one in the voting pool bothered to nominate. Even a specifically pointed “tribute” to diverse series like “With Love,” “Reservation Dogs,” and “We Are Lady Parts” felt cruel considering none of those shows were recognized. Thanks for telling those uninvited how much they were missed at the party, Emmy voters!

It took nearly an hour for the first non-white person to win an award, but what a win it was! Thirty-five years after the first Black woman won for Outstanding Actress in a Comedy Series (Jackée Harry in 1987 for the series “227”), “Abbott Elementary” star and Broadway icon Sheryl Lee Ralph won. Ralph’s win felt like a true culmination of a mountain of hard work she’s presented in film, television, and stage, and it set a high bar for the rest of the night. 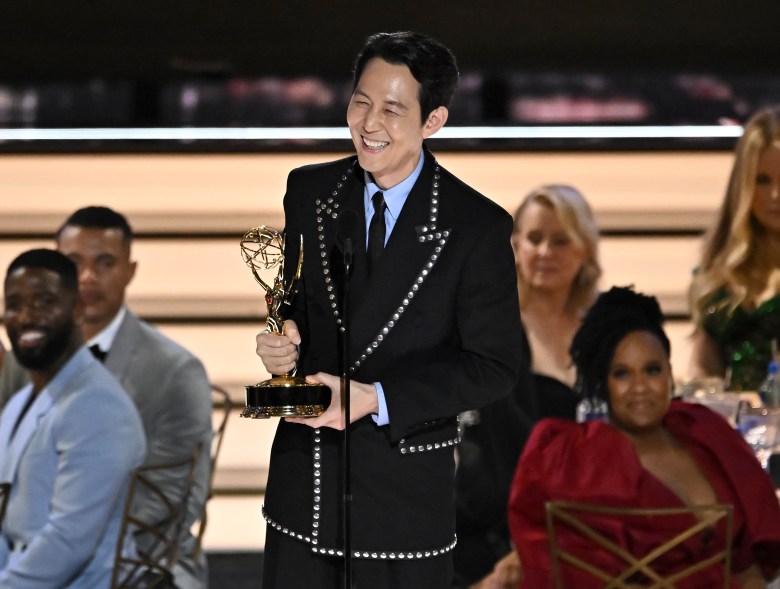 Lee Jung-jae accepts the award for Outstanding Lead Actor in a Drama Series at the 74th Primetime Emmy Awards held at Microsoft Theater on September 12, 2022 in Los Angeles, California.

However, despite the love for Brunson’s writing, “Abbott Elementary” failed to secure the Best Comedy Series Emmy, losing out to “Ted Lasso.” It certainly stung that the show could be recognized for its humorous writing, but it wasn’t humorous enough to be recognized as the best comedy. This was also an Emmys ceremony where in a category with just two nominees (Best Variety Sketch Show) repeat winner “Saturday Night Live” (snooze) could still best the dynamic, all-Black “A Black Lady Sketch Show.”

There were other moments to cheer for, though. Murray Bartlett and Jerrod Carmichael were both LGBTQ winners; Carmichael for his aforementioned “Rothaniel” win and Bartlett for Outstanding Supporting Actor in a Limited Series or Anthology for “The White Lotus.” The ceremony also broke records for its Asian representation, with Hwang Dong-Hyuk becoming the first Asian director to win an Emmy, and an additional first for “Squid Game” being a non-English series. Lee Jung-jae also became the first Asian to ever win the Outstanding Lead Actor in a Drama award, and the third to ever win any acting Emmy. Ever. It’s moments like that that certainly put a smile on audiences’ faces, but also anger that it took this long for these glass ceilings to finally break.

The Creative Artists Emmys tend to do a better job of being more diverse in their winners, perhaps because their voting pool is larger. This year’s wins included numerous BIPOC winners, including Colman Domingo for “Euphoria,” RuPaul, and Barack Obama winning Best Narrator. There was even an opportunity to celebrate shows centering disabled voices, with Best Casting going to Netflix’s reality series “Love on the Spectrum.”

What can be done to improve things? Short of Emmy voters drastically increasing their television viewing, it’s doubtful these stats will change. Creatives need to flip the script and actually cast BIPOC individuals in more roles, if only to increase the pool voters have to work with. If voters won’t watch shows with diverse talent, then the diverse talent has to be in the shows they watch.