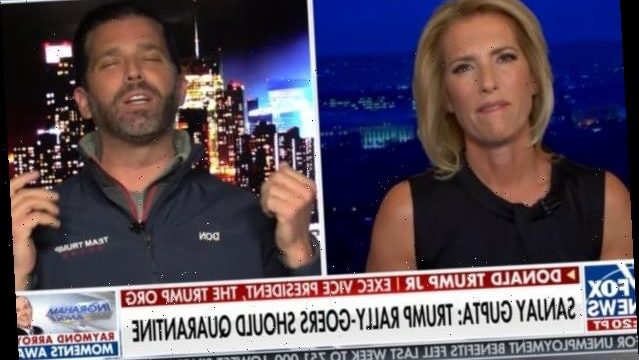 Donald Trump Jr. parroted his father’s words Thursday night on Fox News’ “The Ingraham Angle” when he very incorrectly insisted to host Laura Ingraham that the number of new COVID-19 cases in the U.S. is down to “almost nothing.”

After first rolling a clip of neurosurgeon Sanjay Gupta urging people who have recently attended a Trump rally to assume they’ve been exposed to the virus and quarantine for 14 days, Don Jr. called Gupta and other like-minded people “morons.”

“Don, is he kidding me?” Ingraham said. “They are pulling out all the stops. Now the virus is attending the rally? Apparently, they’re waving flags, too.”

Trump Jr. replied: “Yeah, these people are truly morons, you know what I mean? I like how they go after Scott Atlas because he’s not an epidemiologist, but Sanjay Gupta now magically is. I mean, give me a break, Laura, the reality is this — if you look, I put it up on my Instagram a couple days ago, because I went through the CDC data because I kept hearing about new infections — but I was like, well, why aren’t they talking about this? Oh, oh, because the number is almost nothing, because we’ve gotten control of this thing.”

Then he proceeded to explain how he knows this, urging people to “look at my Instagram” for proof.

“We understand how it works. They have the therapeutics to be able to deal with this. If you look at that, look at my Instagram, it’s gone to almost nothing. We’re outperforming Europe in a positive way, so well because we’ve gotten a hold of this.”

Don Jr. seems to be echoing the sentiments of his father, who declared at a Wisconsin campaign rally two days ago that COVID-19 cases are “way down” in the U.S. despite very clear evidence to the contrary.

It’s frustrating we even have to say this, but despite what the president and his son say, the current situation in the United States when it comes to COVID-19 is very bad. At least 1,016 new coronavirus deaths and 81,457 new cases were reported in the U.S. on Oct. 28 alone, according to the latest New York Times tally. And approximately 229,000 Americans have died from the disease — 29,000 of them since Sept. 22 alone.

In fact, health officials are now warning things will get even worse as we head into winter, with the effects likely compounded by the lack of federal assistance for people affected by the pandemic, thanks to the refusal of Senate Republicans to even consider voting on a bill.

Watch Don Jr. and Ingraham’s conversation in the clip above.

With the election less than a week away, here are the stars who will be voting for President Donald Trump’s second term in 2020