Outside the secret Devs research facility, the world of writer/director Alex Garland’s FX limited series (aptly titled “Devs”) is a recognizable, present-day Bay Area. In the pilot, we follow Segei (Karl Glusman) and Lily (Sonoya Mizuno) from their San Francisco apartment to the fictional Silicon Valley tech giant Amaya where they work.

At the center of the Google-like Amaya campus, buried in the Redwoods, is the windowless Devs complex, which houses the science fiction and mystery of Garland’s story. When Sergei becomes one of the few select employees granted the special security clearance to enter Devs, we finally get to see inside the vacuum-sealed building to discover a pulsing gold metal interior that houses a quantum computer, the beating heart at its core.

“There’s the idea that the scientific heart of the space is also the most magical and lyrical and sort of poetic area within the story,” said Garland, when he was on IndieWire’s Toolkit podcast. In the video below, watch Garland talk about how the production design was based on same theoretical scientific principles that inspired his sci-fi story.

To create this dynamic, evolving, almost living world of the Devs building required an incredible collaboration between cinematographer Rob Hardy and production designer Mark Digby. Digby’s set would not only need to turn scientific principles into geometric art, it would need to accommodate the unique needs of Hardy’s camera and his ability to breathe life into the facility with his lighting.

Hardy and Garland don’t storyboard. There is no set plan. Instead, Garland starts with the actors, then huddles with his cinematographer to plan out the shooting day. And there were many days — seven weeks total, the same length of time it took to shoot all of Garland’s “Ex Machina” — on this one set.

“The aim is always to create a really good foundation so that when you walk onto that set, you can look in any direction, you can react in any way, and you can place the camera anywhere without there ever being a sense of compromise visually or in a way in which we create that world,” said Hardy of his early preparation with Digby. “We create this foundation so that you’re freed up completely when you’re on set and everything is organic.”

The set itself was lit almost entirely by the reflection of light emanating from gold-plated walls. Getting the material and texture of the walls right was vital. After experimentation and camera tests, Digby would eventually cover each of the 90′-by-35′ high walls with 4′-by-4′ foam panels, each panel with concave scoops carved out of them, and then covered with 4″-by-4″ gold leaf pieces paper (244 sheets per panel). A task requiring a tremendous amount time to build and install, but it made for a perfect interplay with the light.

“We went through many different kinds of gold to get to that particular kind,” said Hardy. “Light coming in sort of rolls off, so that when you’re inside, it has a certain mood to it. There’s a lot of silhouettes, and the silhouettes of course lead to fantastic shapes and compositions particularly because you have so many great horizontals and verticals, so it can become a very emotional and graphic environment.”

With the nuance of silhouettes and such graphic images, Hardy would need to be able to not only control the light, but mold it to fit the atmosphere and dramatic needs of the wide variety of scenes that took place over eight episodes inside the Devs facility. Hardy would utilize rows of lights, directed at the walls, that he could easily manipulate. 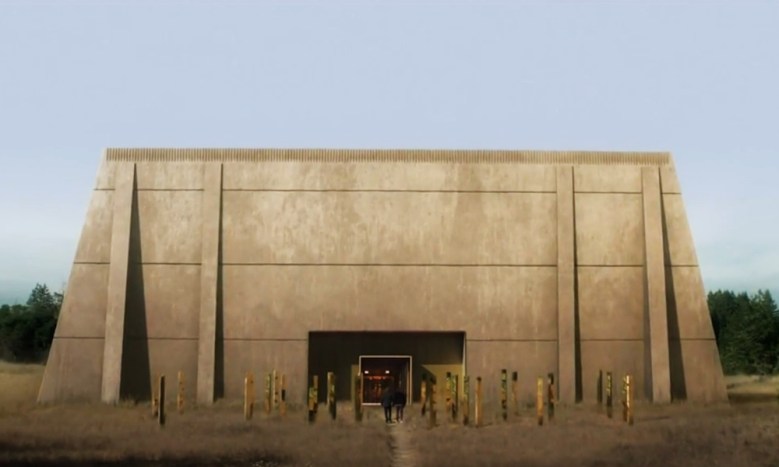 “Devs”: The exterior of the Devs research facility

“We’re using quite a lot of LED [lights] on the set itself, where you could change the color and intensity,” said Hardy. “We could alter it with an iPad and change the shape and feel of the room in seconds.”

The shape of the room didn’t actually change, but adjusting the intricate rows of lighting on the uniquely textured walls could alter the perception of space, which Hardy would then take a step further.

“We invented different styles of ways in which the walls themselves could seem as if they were moving or breathing,” said Hardy. “At first there was no specific motivation for it, other than saying, ‘Somehow this thing is alive,’ not in an organic sense, but the environment itself is a constantly shifting thing as this core computer itself grows and grows.”

The “Devs” team spent a whole day experimenting with how to get this pulsing lighting effect, adding rows of controllable lights pointed at the walls from different directions. “You can create in any direction these combinations of pulsing,” said Hardy. “It could be coming from the top, the bottom, the left, the right, or directly or indirectly. And depending on which combination you have, that determines how the wall itself appears to move.”

Hardy points to an intimate scene between Forest (Nick Offerman) and Katie (Alison Pill) in Episode 7 — where the two are watching a “cave painting” (the quantum computer-generated projections of the past) — to highlight the level of speed and control he had in shaping the lighting setup to fit a scene. By simply making a minor adjustment to “how the walls moved,” along with the softness, intensity, and color of the light on the iPad, Hardy was able to replicate the sense that the two were seated by a fire watching television. By this point in the series we start to see what was happening inside Devs as cold and sterile, but using this concept of an ever-evolving lighting and spatial interior, Hardy could organically motivate and create this intimate fireplace-lit moment on the fly. 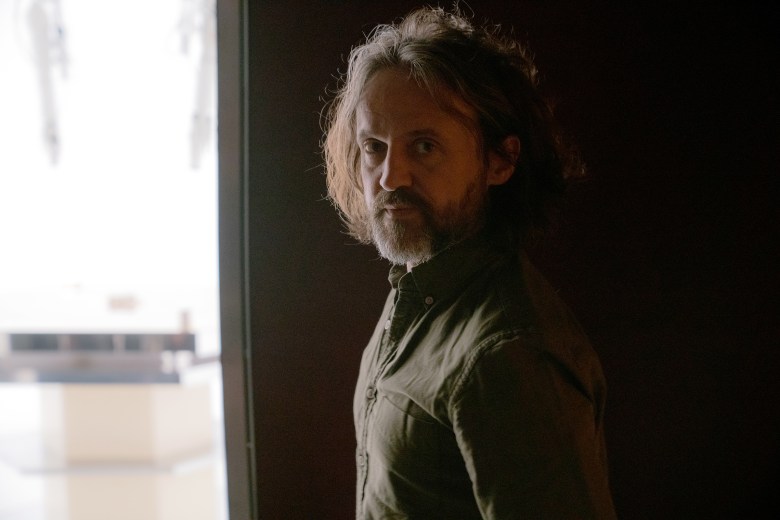 “It was a case that we needed interest and movement and involvement in the lighting, and to add an extra dimension,” said Digby of the interplay between Hardy’s lighting and his production design. “It’s a lot like Alex’s other films that we’ve done, particularly ‘Ex Machina.’ We are in one enclosed space for an awful lot of the action. We need visual interest and change all the time. And we need to be able to do that with production design, with sound, but also with lighting and the cinematography.”

Shooting for seven weeks in this one location, which included some longer nine-page scenes, the use of the camera itself would also have to evolve, and involve the audience, in a similar fashion.

“The cameras had to always have a sense of motion, a sense of that sort of inexorable kind of idea of the Devs facility itself,” said Hardy. “I would have to find ways that each shot, in a sense, is a developing shot — it has a beginning and middle and an end in terms of its movement, in terms of its framing, in terms of its going somewhere.”

Hardy was in constant communication with his dolly grip, while the cinematographer would operate the wheels of the remote camera head. “I could change the shot as it’s happening or respond in a way to any kind of emotionally motivated movement coming from whoever it was that was speaking at the time,” said Hardy. “The end result may well look very precise, as if it’s been storyboarded, but it’s not. Alex and I like to keep the process dictated by our responses to what’s unfolding with the staging and the actors. The only way you can do that is by [exhaustively] prepping the set itself.”