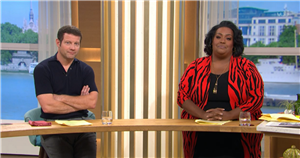 This Morning hosts Dermot O'Leary and Alison Hammond welcomed Simon Calder on Friday's episode of the ITV daytime show as they asked him questions about the new travel rules.

Although the rules haven't been confirmed just yet, Simon appeared on the show to explain what he expects to happen in the announcement from Prime Minister Boris Johnson.

However, before Alison was able to ask one burning question, Dermot ended the interview which left Alison completely unimpressed.

While Simon was sharing an update on what he expects to come from the new travel rules, including the expectation that the amber list is going to be scrapped, Alison was preparing to ask one more question. As Simon signed off and Nick Ferrari and Gyles Brandreth logged on to discuss his comments, Alison said: "I wanted to ask [Simon] about hotel quarantine and then you got rid of him!"

Dermot added: "We had Gyles and Nick Ferrari here you can't keep Ferrari waiting he's there in his studio.

"Nick's thinking, 'When do I get out of here?', He's not waiting on you to speak to Simon Calder about hotels."

Luckily Alison took it with a pinch of salt and started laughing at Dermot's stern reaction.

It came as Simon was sitting at an airport and giving an update on what he believes could be changing with the next rules.

He recognised that it had been months since the rules were first relaxed in May, with the next plans becoming a talking point between the hosts and guests.

As Nick joined them on the show, he said: "I agree with Gyles, this is hopefully another step as we emerge."

He added: "A holiday is what we look forward to, we put in the shifts throughout the year and we get with our husbands or our wives or our children and we go away.

"It gives you something that drives you through the cold autumn nights so if you want to holiday in the UK that's great."

Further discussion surrounded PCR tests, though no indication on the update of the need for the tests have been made just yet.

This Morning returns Monday at 10am on ITV.