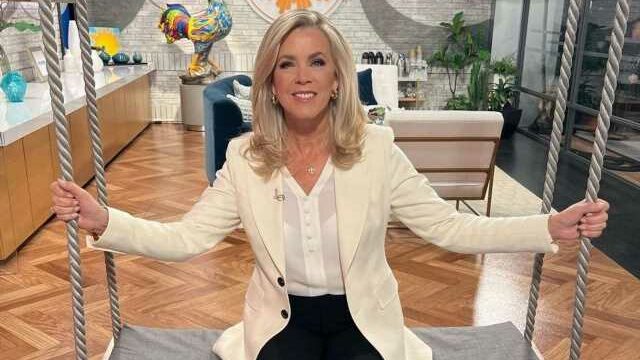 The former ‘Today’ host recounts in a chat with Drew Barrymore one of the most embarrassing incidents she had when interviewing an ‘amateur’ on the NBC breakfast show.

AceShowbiz –Deborah Norville recalls kicking a man repeatedly on live TV before realising he had a prosthetic leg. The 64-year-old journalist was serving as a host on “The Today Show” when she had to interview an “amateur” so explained to him that she would tap him with her foot when it was time to finish what he was saying for the sake of television timing, but ended up “beating the pie out of him” when she got no response.

“When I was on ‘The Today Show’, because it’s very, very finely timed – they will cut you off, the computer will cut you off – so I said to this person I was interviewing, because they were not a professional, they were an amateur and they didn’t go on TV a lot, I said ‘When it’s time to wrap up, I’ll just tap you with my foot and that means just comfortably finish what you’re saying,’ ” she said.

“I get the sign from the person the camera, I go like that, I tap him, nothing happens. I tap a little harder – nothing happens. I’m basically beating the pie out of this guy! Finally, I had to cut him off, He had a prosthesis!”

The “Inside Edition” anchor went on to add that she didn’t understand why he hadn’t told her about his prosthesis as she labelled the incident as one of the “most embarrassing” things she had been through.

Speaking on “The Drew Barrymore Show“, she added, “For the love of Mary, would you not just tell them ‘Well, tap the other leg.’ I was so embarrassed and I had thought ‘Oh God, I’m hurting him, I’m hurting him’ and then I remembered that he doesn’t even have a leg!”

“It was the most embarrassing thing but nobody knew I was embarrassed so I shouldn’t even be telling this story. He did say ‘Oh I should have mentioned’ or something like that but I wasn’t gonna say ‘Yeah you should have!’ The guy had been through enough!”