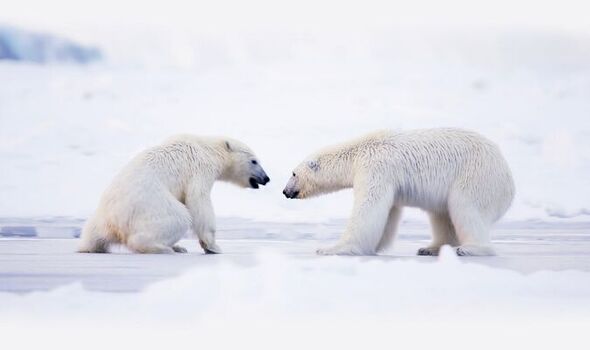 The show follows a young adult female successfully hunting a seal and a young adult male lured by the scent of the kill. The viewers see the male pacing towards the female, as Sir David Attenborough warns that encounters between the normally solitary animals can be vicious.

But instead of clashing, the two beasts, until then strangers, start rolling around and having fun together.

Sir David says: “Remarkably, rather than fight they start to play, dancing on ice, apparently, just for the joy of it. After three hours together they part company and return to their solitary lives.”

Episode producer Rachel Scott, who was on location in Svalbard, Norway, said: “They didn’t go on to hunt together. They were just having fun.”

She revealed it elicited a message from the veteran broadcaster: “He said, ‘My dear girl, this is an amazing film, animals I’ve never even heard of before, let alone seen’.”

Rachel added: “If you can impress David Attenborough – wow. That letter is now on my wall at home.”