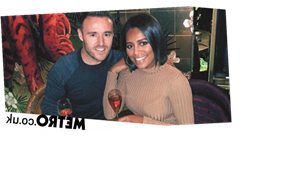 Coronation Street stars Alan Halsall and Tisha Merry got stuck on their way home from holiday.

Tisha — who portrayed Steph Britton on the ITV serial drama between 2013 and 2018 — was on holiday with partner Alan — who plays Tyrone Dobbs — in the Dominican Republic.

The actress was documenting the pair’s holiday via social media posts, but she posted on Instagram stories yesterday about how they’d ended up ‘stuck’ in New York.

Tisa posted a snap of her drink and captioned it with: ‘Wine, please get me through this.’

‘By the time we get home, we will have been on 3 planes and been travelling for over 24 hours!’

Tisha played Steph in Corrie for five years, and during that time she featured in a number of big storylines, and was last seen on the cobbles when she returned for Luke’s funeral.

Meanwhile, Alan has been at the centre of a huge storyline in recent weeks, as manipulator Jade (Lottie Henshall) attempted to get Hope taken off both Tyrone and Fiz (Jennie McAlpine) as a result of her being evil John Stape’s daughter.