Sally (played by Sally Dynevor) hasn’t had much to do with Debbie (Sue Devaney) since she returned to Coronation Street earlier this year to spend more time with her brother, Kevin Webster (Michael Le Vell). The former sisters-in-law will be spending a lot more time together during next week’s episodes of the ITV soap at a time several residents of the cobbles are suspecting the successful businesswoman is harbouring a secret. It will soon emerge she does have an ulterior reason for being back in Weatherfield, but she could resort to desperate measures to ensure the cobbles stalwart stays quiet as it seems she could rumble the mysterious character’s sinister scheme?

The drama kicks off next week when Kevin’s girlfriend Abi Franklin (Sally Carman) becomes suspicious of Debbie, who tells her she has a business meeting in town.

However, the businesswoman is caught out by the mechanic when she sees her boyfriend’s sister heading into The Bistro.

Later on, the mother-of-three confronts the returning character about what she’s really up to in front of Sally’s ex-husband.

It’s not long before Debbie is sobbing her heart out as she tells her sibling she has lost everything and is borrowing money from a friend.

Taking pity of his sister, the soap stalwart tells her she can stay with him for as long as she likes and feeling guilty, Abi arranges for the women to have a heart-to-heart. 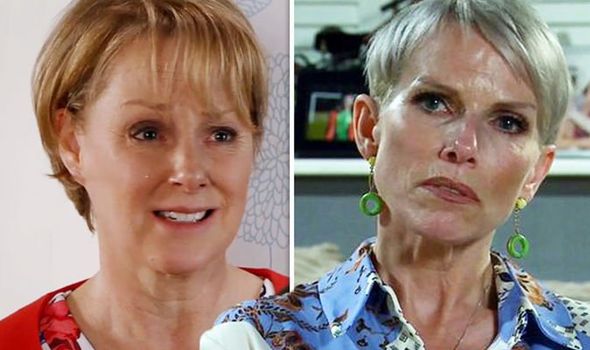 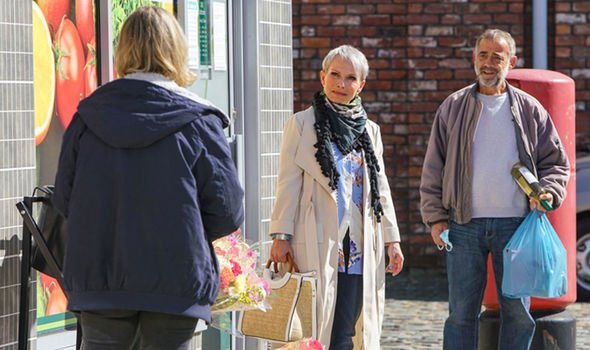 Discussing their failed relationships, Abi tells Debbie what a nasty piece of work Ray Crosby (Mark Frost) is, having seen his villainous side after the toil breakdown of their romance.

The businesswoman becomes a little more interested at the mention of the ruthless entrepreneur, suggesting there could be a link between the two.

Viewers know the businessman is currently planning to take over the cobbles in order to erect a new, modern development in its place.

He is currently playing a game of monopoly, buying up all the houses and businesses on the street, which he plans to flatten during the soap’s 60th-anniversary episodes.

The theory Debbie could be working with the businessman is only exacerbated when Kevin’s sister gets closer to Sally by asking her former sister-in-law to host a garden party. 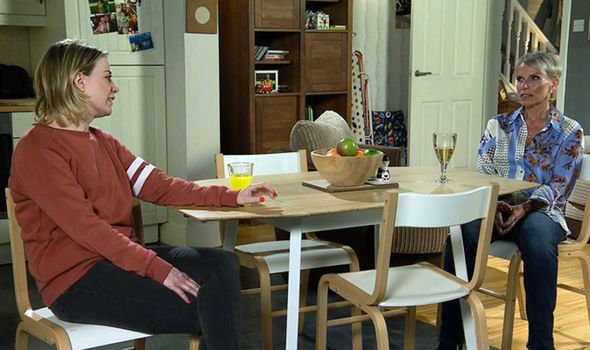 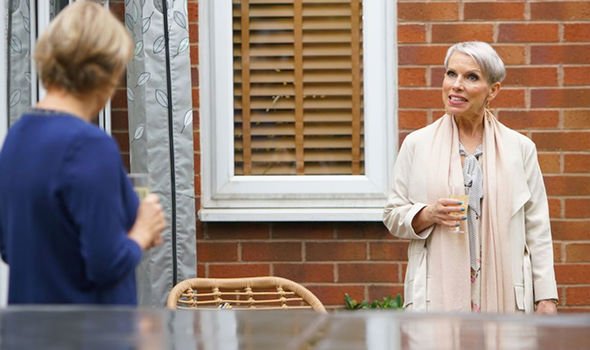 Having overheard his son Tim Metcalfe (Joe Duttine) is having a celebration with his family, villain Geoff Metcalfe (Ian Bartholomew) does his best to ruin the proceedings.

Sally’s husband is furious with his father and it’s not long before Debbie lures him into throwing a bucket of water over the sinister character.

Seeing an opportunity to stir up some trouble, the businesswoman then calls around to speak with Sally’s father-in-law.

Whilst at number six, Debbie tells the villain his daughter-in-law has been slating his name and when she returns to number four, the father and son are at each other’s throats.

Adding fuel to the flame, Kevin’s sister tells her former sister-in-law she wouldn’t put up with living next to someone as vile as Geoff.

Wonder if Debbie Webster is working with Ray?

Later on, it seems the businesswoman’s words are still playing on the stalwart’s mind as she tells Tim she is going to sell the house.

This would be one of the properties Ray is eyeing up to buy, so could Debbie be working with him to get the residents of Weatherfield onside?

If this is her big secret, she could have an Achilles Heel in Kevin’s girlfriend Abi, whose suspicion is spiked when she hears Debbie has urged Sally to sell up.

The residents of the cobbles will discover Ray’s plan in the lead up to the soap’s anniversary and putting the pieces of the puzzle together, Sally could realise her former sister-in-law is working with the villain.

Not wanting Kevin to discover what she’s done, Debbie could pay off the stalwart to ensure she stays quiet and push her to move away from the cobbles.

Would Sally be able to stick to her word and leave Weatherfield, or will she rumble Debbie’s secret to show Kevin the piece of work his sister is?

Viewers have been sharing their theories about Debbie’s connection to Ray on social media, with one writing on Twitter: “Just looking at the upcoming plots on #coronationstreet Is Debbie Webster the mysterious Roxie who is helping Ray? #corrie.”

Another added: “I think I may have worked out who is secretly helping #Ray on #Corrie if my suspicions are correct, I’m putting it out here before it happens. I think it’s #Kevins sister #Debbie #JustSaying.”

With a third commenting: “Probably jumping to conclusions but I wonder if Debbie Webster might be working with Ray? Could she be Roxy? @itvcorrie #coronationstreet #Corrie.”