When someone says “it’s a Sundance movie,” you probably know what they mean: the sort of small, sometimes scrappy movies that helped turn Robert Redford’s film fest out in Utah into both a welcome alternative to big-studio tentpoles (now more than ever!) and a kingmaking institution. It’s a catch-all term, and you don’t to have attended the festival to have seen a Sundance movie. Should you have found yourself left smiling and slack-jawed, or simply moved, by Eighth Grade, or The Spectacular Now, or Minari, or Half Nelson, to name just four movies that premiered there and found a deservedly larger audience afterward, trust us: you know what a Sundance movie is.

There is also a less charitable version of the phrase still in circulation, however, which suggests a rather clichéd version of the programming that regularly dots the fest’s lineup. These films get accused of merely being artisanal takes on stock sitcoms and issue-driven dramas, pushing overly familiar stories flecked with a bit more quirk. They’re often just north of pandering, a little too eager for that easy laugh, a little too aggressive in playing arpeggios on your heartstrings. They regularly walk away with jury awards and trade-reported deals. Maybe you caught Garden State, or Little Miss Sunshine, or Me and Earl and the Dying Girl, or numerous films of a similar vein. “Oh man, that was such a Sundance movie!” It isn’t necessarily a compliment in this case.

CODA, Sian Heder’s story of a young woman torn between pursuing her dreams and being a lifeline for her deaf family and the outside world, isn’t just a “Sundance movie”: it’s arguably the Sundance movie, somehow embodying both meanings of the phrase at once. Yes, this dramedy reminds you that studios don’t make this kind of modest, character-based film anymore. But it also provides a textbook example of the comfy-chair indie cinema that’s been an arthouse staple since the early Nineties. Having premiered at the virtual version of the fest this past January — a shame, as it would have killed with the opening-night Eccles Theater crowd — it went on to win the Grand Jury Prize and the Audience award, as well as getting picked up by Apple for a record-setting $25 million. (It begins streaming on their site starting August 13th.) They are getting a lot of bang for the buck, given that it’s a mash-up of several archetypal, go-to narratives shoved into the sausage skin of a single feature. You’re essentially watching five movies for the price of one.

Based loosely on the 2014 French film La Famille Bélier, CODA — short for Child of Deaf Adults — focuses on a young woman named Ruby Rossi (take a bow, Emilia Jones). Tellingly, you hear the film’s heroine before you see her, with the sound of someone belting out a cover of Etta James’ “Something’s Got a Hold on Me” playing over a boat trawling the Atlantic. Ruby is part of a family who make their bones by hauling in fish, like so many other folks in their Gloucester, Massachusetts, home town. Dad (Troy Kotsur) is the skipper. Her older brother, Leo (Daniel Durant) works with him. Mom (Marlee Matlin) does the books. Ruby helps out, and is the only Rossi who isn’t deaf. She’s also a stealth singer with an amazing set of pipes, a gift that seems destined to go unused and unheralded.

Still, when that cute boy in the King Crimson t-shirt signs up for choir on the first day of school, so does Ruby. That’s how she finds herself standing in front of the school’s music teacher Mr. Villalobos, unable to produce more than a peep in front of her peers. He’s played by Eugenio Derbez, a triple-threat superstar in Mexico that ups the wattage of his supporting role by several notches. This is also a character whose introduction features him striding into a room and declaring, “They made my latte with some kind of nut milk today, so I’m in a mood!”, which, well … let’s just say there’s some broad-stroke sketching being done here. When Mr. Villalobos is finally able to coax the songbird to show him what she’s got, he recognizes a major talent. Her new mentor wants the young woman to develop her voice and audition for the Berklee College of Music at the end of the year. Ruby feels like she can’t leave her family behind. The psychic tug of war begins. 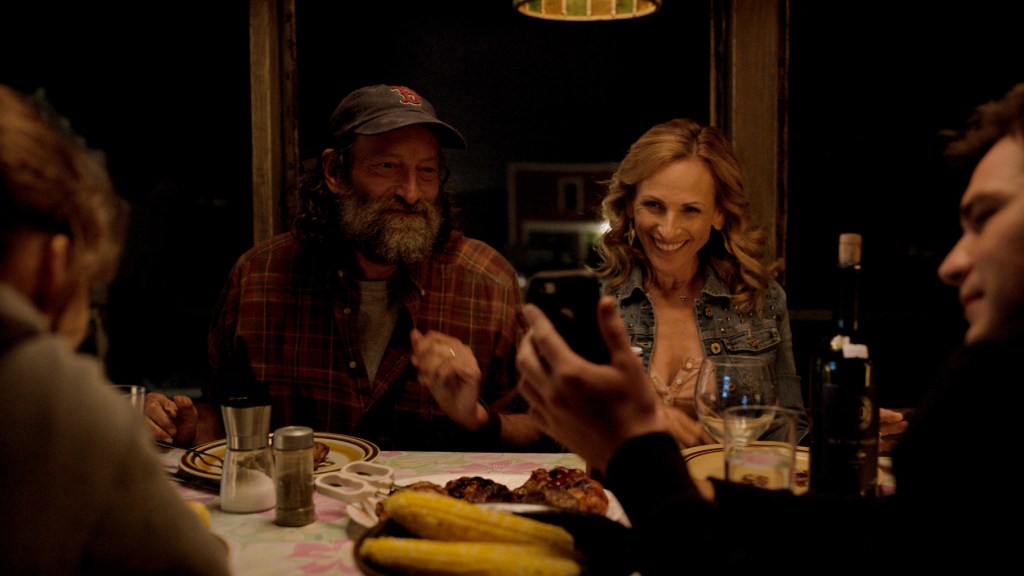 What we have here is a basic triumph-of-the-underdog tale, mixed with a regional David-vs. Goliath drama and an example of representation that you don’t usually get onscreen. The Rossis are fighting against Big Fishing, who want to issue quotas and set up strict economic parameters but won’t give the little guy a fair price. They’re also the type of salt-of-the-earth clan we’ve grown used to seeing on TV and in movies: Dad’s crusty, flatulent and horny; Mom is trying to make sure they can make ends meet; Leo is getting into bar fights and getting it on with ladies in the back room; there’s a rivalry between siblings but everyone sticks together, because blood is thicker than a New England accent. None of them get why Ruby wants to sing. The fact that three of the four members happen to be deaf is both no big deal — they’re a family, loving and embarrassing and argumentative, just like yours — and a distinguishing factor. You’ve seen these interactions before. You just don’t usually see them angrily signed in ASL.

It’s in these family scenes where CODA comes alive the most, because the roles haven’t just been cast with deaf actors — they’ve been extremely well-cast, period. A TV veteran, Kotsur gives this blue-collar patriarch an impish quality that keeps Ruby’s dad from being a stock finger-wagger or a callous-handed saint; it’s the type of performance that tend to get older actors who already have long IMDb pages labeled “discoveries.” Durant adds some shade to the chip-on-the-shoulder heir apparent, itching to prove that he can handle the business. No one needs to sell anyone on Marlee Matlin’s talents — we can only say we’ve missed seeing her onscreen, and that this part is a great example of how she can make a meal out of just about anything. Jones has a lot of heavy lifting to do, from playing the odd person out to showing someone caught between two worlds to convincing you she’s second coming of Dusty Springfield. She handles it all deftly, even when the film starts throwing one plot pivot-point after another at her. Which, it’s fair to say, happens a lot.

And that’s what ultimately starts to sink CODA, despite everything it has going for it. The knock here isn’t that it’s a blatantly feel-good movie, shameless in its attempts to slap a grin on your face or work those tear ducts. It’s that it’s like watching several of those kinds of movies jockeying for space, and the pile-up turning into something that’s too much yet not enough. There are grace notes abound, including a formal conceit that Heder pulls during Ruby’s school-concert duet which is too good to outright spoil. But by the time you get to the sixth or seventh ending, the whole thing leaves you less uplifted than exhausted. CODA knows how to work that conventional-to-a-fault indie feeling like a champ. You may exit smiling. Just don’t be surprised if you also experience the sensation of having just been Sundanced to death.