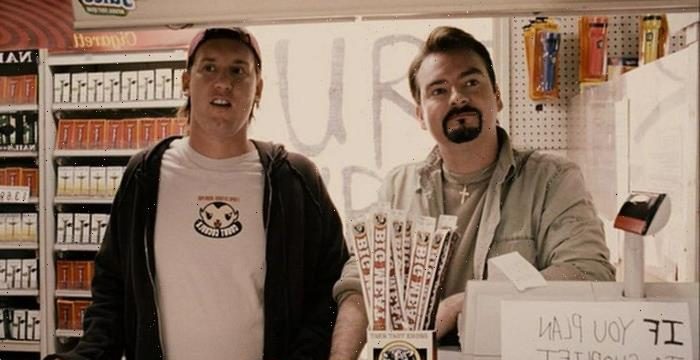 It’s been a long, winding road for writer and director Kevin Smith to bring Clerks 3 to the screen. There were starts and stops, but in July of this year the sequel to Smith’s debut film, Clerks, was finally officially greenlit. Now the first official photo from the sequel’s production has arrived online, revealing your favorite convenience store employees in all their glory.

Back Behind the Counter

As part of an exclusive first look, Vanity Fair has a picture (click through to check it out) of Dante (Brian O’Halloran) and Randal (Jeff Anderson) standing in front of the beloved Quick Stop counter with Clerks 2 characters Elias (Trevor Ferhman) and Becky (Rosario Dawson). They all look, well, old, except for Dawson, who hasn’t aged a bit since she joined Smith’s View Askewniverse with Clerks 2 in 2006. Smith explained the concerted effort not to hide the actor’s ages, because these characters have aged like the actors. The writer/director said:

“I know we’ve got fans who age with us…and it’s going to hit in a lot of personal places. I don’t think the 20-somethings are going to be like, ‘He’s still the voice of a generation!’ They’re going to be like, ‘Well, he’s the voice of middle age, if anything, at this point.’ I hope young people will find something to enjoy about it, but it’s definitely a movie about people who try to be young while being old,” Smith said. “All of us are in our late 40s, if not 50s…and you’ll see the progression,” Smith said. “We don’t hide the age. We don’t Hollywood it up. We all look as old as we look.”

Bringing the guys back to the Quick Stop made a lot of sense, but it took a near-tragedy for Smith to figure out how to expand their story. He explained:

“The film is predicated on the idea that Randal survives a heart attack, a massive heart attack, quite like I did, and then winds up, you know, deciding that he’s wasted his life,” Smith said. “But before he dies he wants to memorialize himself. He wants to make a movie. So our boys essentially wind up making Clerks.”

Randal and Dante making a movie aboout their lives as clerks is a pretty meta way for Smith to return to his own origin story. He famously filmed Clerks at night after closing up the convenience store he worked in by day, selling his prized comic collection and maxing out credit cards to film a wholly independent feature. It ended up debuting at Sundance and the rest, like they say, is history. Now Smith’s characters get to follow in his footsteps, making their own movie about a convenience store while working in one.

Randal’s movie is called Inconvenience, and it allowed Smith to reshoot a bunch of key moments from Clerks within Clerks 3. While Clerks 3 will be in color, much like Clerks 2, the film-within-the-film will be in black and white. Smith is eager to see fans mash up footage of the old movie with the new, fake one.

Clerks was almost entirely Dante’s movie, focusing on his struggles to work on his day off. Clerks 2 centered on the relationship between Dante and Randal, though Dante was still the primary protagonist. Now, with Clerks 3, Smith is giving Randal the leading role. The filmmaker said:

“Suddenly, you know, Peter Pan realizes that he ain’t gonna live forever. Life is short, and time is short, and he’s not guaranteed much of that anymore.”

Smith’s one professional regret is that he hasn’t given Dante or Randal much screentime in a long time. While stoner duo Jay and Silent Bob (played by Jason Mewes and Smith himself) will return in Clerks 3, they’ve also been in almost every other major Smith release. (They’re not in his Waco-inspired horror movie Red State, but that’s about it.) Dante and Randal were the characters that got Smith started making movies, and he’s thrilled to return to them.

“These characters are so close to my heart, and finally letting them take the journey that they sent me on is a big deal for me. Without Dante and Randal, I’m not where I am.”

Returning to the Quick Stop

The other thing Smith is stoked about is the return to the Quick Stop. While he loved Clerks 2, it’s set in the fictional fast food joint Mooby’s and is purely the stuff of Smith’s imagination. But the Quick Stop was real and inspired the original movie. Smith recalled:

“I love it so much, but the problem with Clerks 2 is it’s pure artifice to a large degree. Clerks was based solely on reality. I woke up, I went to that store; crazy people came in; kids hung out outside and sold drugs; I had a friend who worked next door. All of it was very autobiographical. Clerks 2 is completely fabricated, right down to the fact that I never even worked in fast food.”

Clerks 3, he says, is a “bizarre return to form.” Bringing Clerks full circle feels right, somehow, and I look forward to seeing Clerks 3 whenever it shows up on the big or small screen.