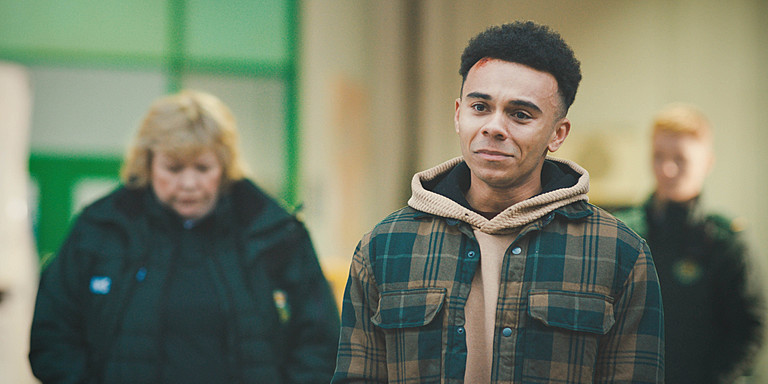 When Teddy (Milo Clarke) arrived at the hospital at the beginning of tonight’s Casualty to hand in his resignation, it looked like it might be the last time we would ever see him. His over-protective mother Gaynor (Maxine Evans) had bought a suitcase full of supplements and medications for his heart condition and was preparing to drive him back home with her to Manchester – as far from the blue lights and sirens of Holby as she could get him.

Viewers will have shared Jan (Di Botcher)’s reluctance to accept his resignation, though, because it was clear to see that Teddy hated the idea of leaving the job he loved and a life with Gaynor would be stifling and dull in comparison.

It was lucky, then, that the first patient Teddy saw being brought in was Al Shepton (Stevie Raine), who Teddy had treated before. He’d been brought in after a savage beating.

Teddy got involved in Al’s case, and when Al vanished from the hospital with a serious head injury Teddy and Jan went to track him down before it was too late. As he tends to do, Teddy rushed into the situation oblivious of any danger and a shack collapsed on him and Al – but he saved Al’s life and didn’t suffer any real damage himself so all was well. The most important thing was that it made Teddy realise he couldn’t give up being a paramedic.

In an emotional scene he told his mum he wouldn’t be going to Manchester. She said if he didn’t, she wouldn’t be coming back and he’d be on his own. Teddy looked around at Jan, Iain (Michael Stevenson) and Sah (Arin Smethurst). ‘I’m not on my own,’ he said. ‘I’m with my friends, with Auntie Jan, with family.’

Elsewhere, Holly from HR (Simone Saunders), who we previously saw questioning everyone about Matthew (Osi Okerafor)’s claims of sexual harassment against Stevie (Elinor Lawless), was back as a patient after a cosmetic procedure went wrong. She repaid Faith (Kirsty Mitchell)’s kindness to her by giving her the number of a union rep who can help Stevie to defend herself against Matthew’s claims.

Patients of the week were Kayley (Ellie-May Sheridan) and her brother Dane (Ryan Nolan). He was the one who beat Al up in the woods, but it emerged that he’d been abused as a child and had anger issues as well as being convinced that Al was a sex offender. His younger sister Kayley knew that Dane had only acted out of a misplaced instinct to keep her safe (rather like Gaynor’s misplaced instinct to keep Teddy safe – Casualty does enjoy these patient/staff parallels), but she also knew he needed help and told the police what he’d done.