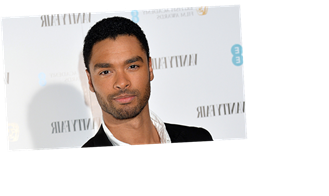 The Bridgerton sensation is coming to Studio 8H.

Breakout star Regé-Jean Page, who plays the Duke of Hastings on the popular Netflix drama, has been tapped to host Saturday Night Live on Feb. 20, NBC announced Saturday. It will be Page’s hosting debut.

The British actor will be joined by musical guest Bad Bunny, who is currently nominated for two GRAMMYs. His latest album, El Ultimo Tour del Mundo, debuted at No. 1 on the Billboard 200.

Page, for his part, is currently nominated for an NAACP Image Award and two Screen Actors Guild Awards.

Adapted from Julia Quinn’s best-selling novels about 1800s London society, Bridgerton became one of Netflix’s top original series since it dropped Christmas Day. Page and fellow co-star Phoebe Dynevor, who plays Daphne Bridgerton, have since become the talk of the town.

‘Bridgerton’: On-Set Secrets From London and What to Know About Season 2 (Exclusive)

‘Bridgerton’: On-Set Secrets From London and What to Know About Season 2 (Exclusive)

The first season, based on Quinn’s first Bridgerton novel, The Duke and I, follows Daphne (Dynevor), the eldest daughter of the revered Bridgerton family, as she makes her debut in London society hoping to find a match sparked by true love but who also must meet the approval of her oldest brother, Anthony (Jonathan Bailey). After she’s named the crown jewel by Queen Charlotte (Golda Rosheuvel), she and others around her become the subject of a gossip paper written by the mysterious Lady Whistledown (voiced by Julie Andrews), who stirs up drama among friends, families and outsiders alike.

Meanwhile, the Duke of Hastings (Page) makes an unexpected return home to London, where he quickly becomes a hot commodity by mothers hoping to marry off their daughters to the most esteemed bachelor available. But the Duke, who has no interest in settling down, soon finds himself scheming with Daphne as they attempt to navigate the social season together.

Season 2, which begins filming this spring, will likely be loosely inspired by Book 2 in the series, The Viscount Who Loved Me and focuses on Anthony and his quest to find love. Bailey spoke with ET recently to offer a preview of what’s to come. “It’s just going to get more exciting and convoluted and sexier, I think,” the actor said, adding the series will surely “be pushing boundaries every single way.” But what he does know for sure is “that the story is going to be really exciting.”

“I think Chris Van Dusen has got this amazing ability to take Julia Quinn’s extraordinary books and her amazing worlds that she delicately filled with excitement and sexiness. And he takes it to a whole other level,” he said, when asked how much the new season will parallel the narrative in the books. “So the fact that we’re following Anthony’s pursuit for love shows that you know there’s definitely going to be some similarities.”

Though Bailey played coy about whether fan-favorite Kate Sheffield will be a major player in the new season, you can read between the lines. “Having read the second book, if Anthony gets to meet anyone half as brilliant as Kate Sheffield is, then he’s going to be a very lucky man.”

For more, watch below.