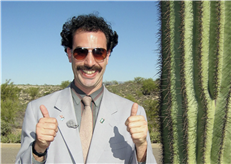 “‘Borat” made a worldwide comedy superstar out of Sacha Baron Cohen upon its release in 2006, and it also broke Pamela Anderson back into the spotlight. Anderson co-starred opposite Cohen in the controversial mockumentary comedy, playing a fictionalized version of herself who becomes the object of desire for Cohen’s outrageous Kazakh journalist. The movie’s plot revolves Borat’s attempt to come to America so he can marry Anderson. The film’s humor led to several controversies, but it turns out it also led to Anderson and Kid Rock’s divorce. Cohen confirms the news on an upcoming episode of The Daily Beast’s “The Last Laugh” podcast.

“Kid Rock saw the movie, and I texted Pamela Anderson and asked, ‘How did it go? What did he think?’” Cohen says on the podcast. “And she texted back, ‘He’s getting divorced.’”

Cohen asked Anderson why her marriage to Kid Rock was ending, to which she answered, “Because the movie.” Cohen went on to say, “I thought it was a joke, but then a few weeks later they got divorced and they put as a reason for divorce: ‘Borat.’ So it had some casualties.” The movie opened November 3, 2006 and the two divorced on November 27, 2006.

Anderson also lost a “bit of bone from her jaw” while making the movie. The incident occurred during the filming of the infamous kidnapping scene, where Cohen says Anderson “clipped her jaw.” As Cohen put it, “She’s actually amazingly brave. She lost two things. One, she lost a tiny bit of bone from her jaw, so she really should have gotten an award for that. And secondly, she lost a husband.”

Cohen confirmed that Anderson was one of the only people who appear in “Borat” that was in on the joke before filming began. A majority of scenes in the movie feature Cohen in character as Borat opposite everyday people who did not know prior to filming that Cohen was making a movie. “Borat” was a critical and commercial hit when it opened in theaters, grossing over $260 million worldwide and winning Cohen the Golden Globe for Best Actor in a Comedy Film. Cohen’s script for the movie went on to earn an Oscar nomination for Best Adapted Screenplay at the  79th Academy Awards.