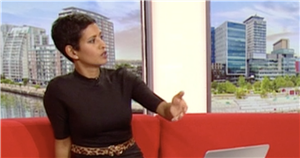 BBC Breakfast fans were left hiding behind their hands on Thursday morning, as Naga Munchetty brutally shut down her co-host Charlie Stayt.

The hosts were sitting on the red sofa while they combed through the day's newspapers, with Naga telling Charlie about an experiment which found puzzle solving is improved by drinking tea versus water.

Charlie, meanwhile, quizzed Naga on a car-related event that happened in 1959.

"Do you know what happened in this day in 1959?" Charlie wondered, as Naga cheekily replied: "How long have we got to guess?"

Charlie explained: "Well, you're not really going to guess, are you – else you'd go on all day!"

The presenting duo then turned to pick Ben Thompson's brains, as Charlie added: "Very important in the car industry."

Naga eagerly guessed: "Double clutching stopped. No, that carried on for a long time. Reverse was put in? Handbrake was made handbrake!"

Charlie quickly shut her down, simply saying: "No," as he invited Ben to guess – who went with "power steering".

"No!" Charlie repeated. "To do with production. A car."

But Naga was quick to shut him down as she snapped: "Well, that's not about what changed in the car, is it? That's just about what new car came to light. You didn't ask the question correctly!"

But fans on social media were left cringing at the awkward exchange, with one writing: "@BBCBreakfast why continue to put Naga and Charlie on together, they apparently clash and it becomes about them and not the news! Does my head in…"

It comes just days after Naga brutally cut off one BBC Breakfast guest during a chat about Wales.

Jane Richardson from Conwy was talking about her home town when Naga savagely swooped in to cut her time short, announcing: "Jane you're pushing it! You're pushing the time Jane. No, no no, I'm diving in.

"I've done it to Roger, we're doing it to you," interjected the host before stopping the chat.

She went on to cut off co-host Jon Kay after he attempted to ask his own question about Conwy, snapping: "No, no, no, we don't need you to answer that!"

BBC Breakfast airs from 6am every day on BBC One.