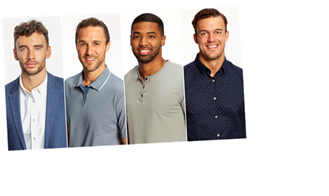 This week’s episodes of The Bachelorette — that’s right, there are two! — will see Tayshia connect with her final four men and their family members at La Quinta Resort & Club in Palm Springs, California. Since travel isn’t possible due to the coronavirus pandemic, production has arranged for each man to enjoy a special date at the resort… and according to Chris Harrison, it gets pretty emotional.

“These are moms and dads and friends that aren’t used to stepping onto our stage and so it was a very vulnerable, almost uncomfortable feeling because they were walking into the lights, the cameras and our moment,” he told ET last week. “It’s a very different hometowns than you’ve ever seen before.”

“These guys are in deep and it says a lot about her,” the host added. “It’s only going to get more difficult, more emotional as we go on.”

As Tayshia prepares to make her final choice, here’s what we know about her final four men: