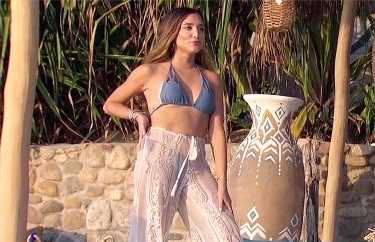 What’s it like when your new flame’s old flame shows up on the beaches of Paradise? Just ask Nicole Lopez-Alvar.

In PEOPLE’s exclusive sneak peek at Tuesday’s episode of Bachelor in Paradise, Nicole can’t help but laugh at the situation she’s found herself in since Angela Amezcua joined the cast after running into her ex-boyfriend, Clay Harbor, at Chris Randone and Krystal Nielson’s nuptials in Mexico.

Joking around with BFF Tayshia Adams on the beach, Nicole — who has been dating Clay since the season started — decides to recreate the moment when Angela, who was one of Krystal’s bridesmaids, made her grand entrance at the wedding, knowing all too well that her ex was there as a guest.

“Nicole, give me your best Angela,” Tayshia instructs. “I’ll be Chris Harrison.”

“I cannot wait to officiate this couple,” begins Tayshia, playing Chris. “Let’s watch the bridal party come down the aisle.”

With that, Nicole delivered her best impression of Angela’s epic revenge catwalk down the beach, lips pursed as she strutted her stuff.

“I swear, when she walked down the aisle, she thought, ‘This is my walk. My ex is going to be in the room,'” Nicole said. “She’s been preparing this walk for months.”