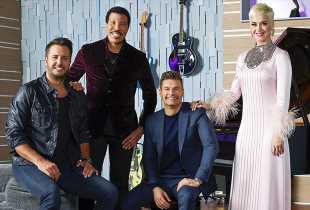 Katy Perry, Luke Bryan and Lionel Richie all will be back for the competition series’ next cycle, ABC announced Monday. Radio DJ Bobby Bones also will reprise his role as in-house mentor to the contestants.

Though Perry, Bryan and Richie have served as Idol‘s judges since the show was revived on ABC, it was rumored that the Alphabet Net planned to cut costs ahead of the next cycle, largely due to a decline in ratings. Much of the potential belt-tightening was allegedly focused on the judges’ salaries (most notably Perry, who is said to be pocketing $20 million per season), but there’s no word on whether any changes were made.

Conspicuously absent from ABC’s 1,320-word announcement was the name Ryan Seacrest. Though Seacrest is in the middle of a long-term overall deal with ABC, he has not yet been confirmed as the Season 18 emcee. During Season 17, Seacrest took his first-ever Idol sick day, prompting Bones to fill in as host for one of the broadcasts. At the time, 23 percent of TVLine readers said they preferred Bones to Seacrest, while 33 percent said they didn’t notice much of a difference between the two.

“American Idol is the original music competition series,” ABC Entertainment chief Karey Burke said in a statement. “It was the first of its kind to take everyday singers and catapult them into superstardom, launching the careers of so many amazing artists. We couldn’t be more excited for Katy, Luke, Lionel and Bobby to continue in their roles as American Idol searches for the next great music star, with more live episodes and exciting, new creative elements coming this season.”

American Idol will return in 2020.