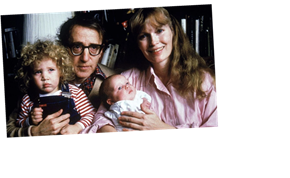 Buzz around HBO’s four-part documentary series “Allen v. Farrow” exploded after episode two due to the public airing of a long-discussed, never-before-scene home video featuring seven-year-old Dylan Farrow disclosing Woody Allen’s alleged abuse. While the series has been largely acclaimed (IndieWire’s Ben Travers called it “the final nail” in Allen’s “long-unclosed coffin”), a new essay published in The Guardian condemns the documentary for omitting facts that support Allen’s innocence. As on example, Guardian writer Hadley Freeman questions why filmmakers Amy Ziering and Kirby Dick left out the Valentine’s Day card Farrow sent Allen after their breakup that featured a photo of their children stabbed with pins and scissors. Freeman also notes the doc does not reference Allen’s 1992 interview where he claimed Farrow told him, “You took away my daughter, and I’m gonna take away yours.”

The Guardian essay includes a statement from Amy Ziering and Kirby Dick defending “Allen v. Farrow” from Freeman’s criticism. Per the publication: “The Guardian sent a detailed list of ‘Allen v Farrow’s’ omissions to Ziering and Dick. Instead of responding to them individually, they sent this response, which they requested be printed in full.”

The full statement reads: “The filmmakers behind ‘Allen v Farrow’ meticulously examined tens of thousands of pages of documents, including court transcripts, police reports, eyewitness testimonies and child welfare records. We spoke with dozens of persons involved with the case who had first-hand knowledge of the events and whose accounts could be independently corroborated. ‘Allen v Farrow’ is a complete, thorough, and accurate presentation of the facts.”

Soon after the first episode of “Allen v. Farrow” aired in February, Woody Allen and his wife Soon-Yi Previn issued a joint statement condemning the project and the network for airing it. The statement reads: “These documentarians had no interest in the truth. Instead, they spent years surreptitiously collaborating with the Farrows and their enablers to put together a hatchet job riddled with falsehoods. Woody and Soon-Yi were approached less than two months ago and given only a matter of days ‘to respond.’ Of course, they declined to do so.”

The statement continues, “As has been known for decades, these allegations are categorically false. Multiple agencies investigated them at the time and found that, whatever Dylan Farrow may have been led to believe, absolutely no abuse had ever taken place. It is sadly unsurprising that the network to air this is HBO — which has a standing production deal and business relationship with Ronan Farrow. While this shoddy hit piece may gain attention, it does not change the facts.”