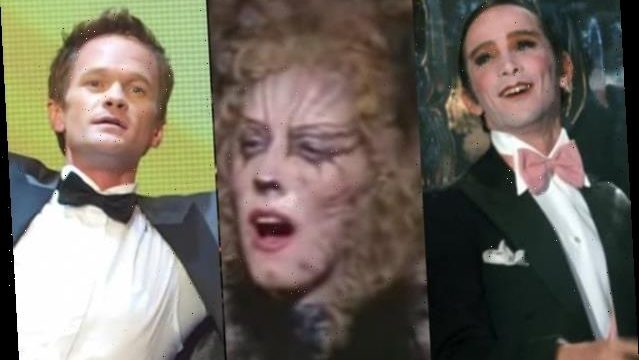 “Cabaret” (1967)Joel Grey sang “Willkommen” to the big time, winning both a Tony (and later an Oscar) playing the M.C. in this musical set in the early days of Nazi Germany.

“Promises, Promises” (1969)OK, the song “Turkey Lurkey” frankly doesn’t make any sense — and the whole office holiday party is kind of shoehorned into the plot. (The show’s “I’ll Never Fall in Love Again,” however, became a big hit for Dionne Warwick.) But Michael Bennett’s choreography is head-bobbingly, arm-spinningly awesome.

“A Chorus Line” (1976)The full “I Hope I Get It!” opening number from the quintessential backstage show — amazing how long CBS let the numbers run back in the day. Bonus for “Gilmore Girls” fans: That’s Kelly Bishop as the haughty dancer who says, “I had it when I was in the front.”

“Sweeney Todd” (1979)Angela Lansbury won the fourth of her five Tony’s playing the daffy Mrs. Lovett, the baker of “The Worst Pies in London,” in Stephen Sondheim’s dark musical.

“Dreamgirls” (1982)Jennifer Holliday’s rendition of “And I’m Telling You…” has been widely imitated, and this is the performance that is most often imitated. A-ma-zing.
https://youtube.com/watch?v=ivIT0TQ4vRM%3Flist%3DPLUmM2DiFs6SH3Fs4pvalp4zfDgXwqrj6G
“Cats” (1983)Andrew Lloyd Webber continued his domination of Broadway with this feline musical starring Betty Buckley as Grizabella. Interestingly, the breakout ballad “Memory” was one of the few songs whose lyrics didn’t come from T.S. Eliot’s “Old Possum’s Book of Practical Cats.”

“Grand Hotel” (1990)Michael Jeter, perhaps best known from the sitcom “Evening Shade,” was a rubber-limbed sensation playing a tipsy bookkeeper in the number “Let’s Take a Glass Together.”

“Rent” (1996)Jonathan Larson’s rock opera version of “La Boheme” gained extra poignance with his unexpected death after the first Off Broadway preview. The show became a phenomenon, and launched the careers of Idina Menzel, Jesse L. Martin and Taye Diggs.

“Chicago” (1997 revival)Bebe Neuwirth and Ann Reinking displayed all the athleticism of Bob Fosse’s original choreography in the hit revival of Kander & Ebb’s musical about the dawn of celebrity criminals (which led to the Oscar-winning 2002 movie).

“The Lion King” (1998)While Disney’s stage version of the animated movie swept most of the major awards in 1998, we chose the opening number from the 2008 telecast — celebrating the show’s 10th anniversary and with clearer shots of Julie Taymor’s magnificent puppets and stagecraft.

“Wicked” (2004)Idina Menzel may have had some cold-induced pitchiness on the final note, but she (and co-star Kristin Chenoweth) are still pretty sensational on the now-standard showstopper “Defying Gravity.”
https://youtube.com/watch?v=cuGBg-iam2U%3Flist%3DPLuvtl-LEQ8UH9XktE6SMkIfI2NUBSjdPX
“The Drowsy Chaperone” (2006)Sutton Foster shows off while insisting that she doesn’t want to show off no more in this delightful number.

“Gypsy” (2008 revival)Everything came up roses for Patti LuPone, who won her second Tony Award playing the irrepressible Mama Rose in the classic musical about showbiz striving.

Neil Patrick Harris’ Tony Opening Number (2013)It’s hard to fill a space as cavernous as Radio City Music Hall — but NPH did just that with a “bigger” number (written by “Hamilton” composer Lin-Manuel Miranda) that included high steps, high notes, leaps, magic, shout-outs to “How I Met Your Mother” fans and even Mike Tyson. Wow.

James Corden’s Tony Opening Number (2016)The hard-working late-night host (and a Tony winner himself) did his own version of a dream-big number, running through a dozen classic Broadway musicals from “Les Miz” to “Fiddler on the Roof” to “Annie.”

“Hamilton ” (2016)Audiences at home finally got a chance to see a slice of the buzzed-about hip-hop hit, which even scored an intro from Barack and Michelle Obama.

Marjory Stoneman Douglas High School Drama Students Sing “Seasons of Love” (2018) There wasn’t a dry eye in Radio City Music Hall when students from Parkland, Florida, performed the anthem from “Rent” months after a horrific mass shooting killed 17 of their classmates and teachers. The Tonys had honored their drama teacher, Melody Herzfeld, with a special award.
Source: Read Full Article