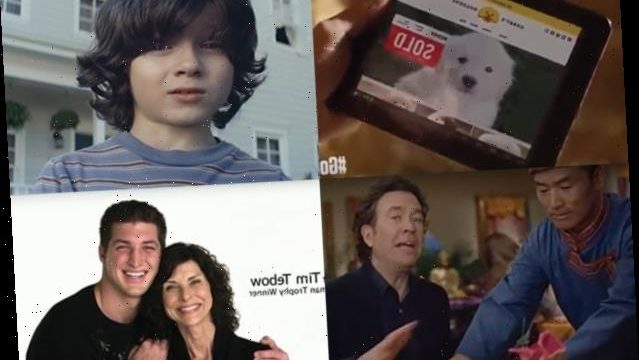 GODADDY (2015)
In the ad, a puppy falls off a truck and hearteningly finds its way home. The seemingly sweet commercial shocked viewers as the owner then sells the puppy. Outrage ensued, forcing GoDaddy and ad agency Barton F. Graf to remake the spot, dog-free.

SNICKERS (2007)
After two men accidentally kiss, they respond by having to do something “manly” in this spot for the Mars candy bar. The Gay and Lesbian Anti Defamation League said the ad’s message was homophobic, and a few years later it was voted the second worst Super Bowl ad of all time by Ad Age.

NATIONSWIDE’S “BOY” (2015)
This ad depicted the unrealized life of a boy who never grew up after dying in an accident. The spot sparked online debate about the inappropriateness of using tragedy to sell insurance. Nationwide’s Chief Marketing officer left the company three months later, and the insurer skipped the Super Bowl the following year.
JUST FOR FEET (1999)This was considered one of the biggest “oops” commercials of all time. In the spot, a group of men hunts a barefoot Kenyan runner to force shoes on him. After objectors hinted at the ad’s blatant racism, the client sued its ad agency, Saatchi & Saatchi. The next year, Just for Feet went bankrupt.

ANTI-DRUG PSA (2002)
This commercial ran shortly after the Sept. 11 attacks and uses the excuse making that’s common to narcotics use to suggest a link between drug money and terrorism.

GROUPON (2011)
Starring Timothy Hutton, this spot starts by highlighting the crisis in Tibet, but pivots to a pitch for Groupon, hyping a deal that offered $30 worth of Tibetan food for $15 at a restaurant in Chicago. The slogan, “Save the Money,” prompted widespread Twitter indignation.

FEDEX (2008)
This “Wizard of Oz”-inspired commercial was banned for allegedly encouraging viewers to huff substances.

TIM TEBOW FOR FOCUS ON THE FAMILY (2010)
The NFL star and his mother starred in this ad discouraging abortion, enraging many over the commercial’s pro-life message.

SKETCHERS DOG RACING (2012)
This spot for the shoemaker outraged animal lovers and was accused of promoting abuse for promoting dog racing. More than 100,000 people signed a petition to get the ad pulled from from the Super Bowl, but it aired any way.

SALESGENIE (2008)
Racism was the charge leveled at SalesGenie for this ad featuring a pair of animated pandas who work in a bamboo furniture store and sport hyperbolized Chinese accents. It was pulled from the airwaves following the Super Bowl.

HOLIDAY INN (1999)
Holiday Inn came under fire first by transgender advocates when it ran this ad comparing the $1 billion worth of upgrades at its hotels to gender reassignment surgery. The commercial was cut shortly after the Super Bowl.

84 LUMBER (2017)
Just weeks after President Trump’s inauguration, 84 Lumber made an ad depicting a group of Latin migrants on a journey to America before coming face to face with an imposing border wall. Fox deemed the conclusion of the ad “too controversial” and aired an edited, 90-second version without a wall, with the ad directing people to a website to watch the full version.
Source: Read Full Article