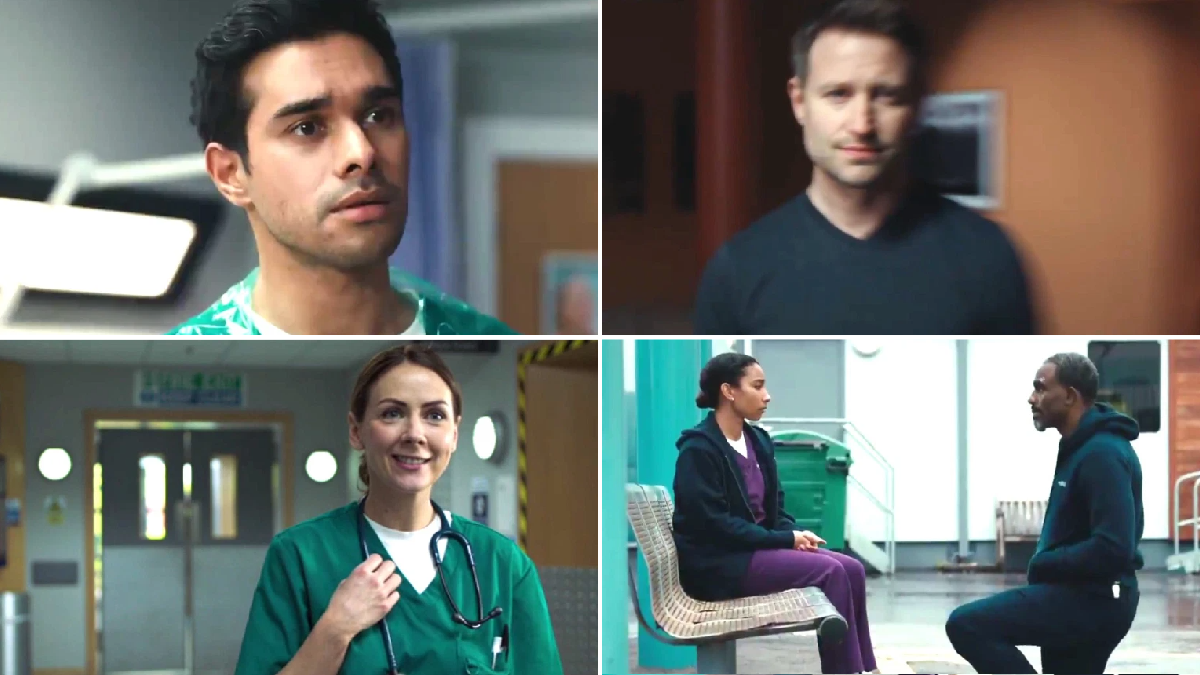 Following the death of Fenisha (Olivia D’Lima), an unwell Ethan was brought into the ED and, struggling to find a point to his life now Fenisha had gone, had visions of his dead brother Cal and was transported back to a day in 2016.

After just discovering he had the Huntington’s gene, Ethan was contemplating on giving up his career.

A resignation letter in hand, Ethan toyed with the idea throughout the feature-length episode but eventually, he decided to stay at Holby City hospital.

The straight-talking new face was an old friend of Faith’s (Kirsty Mitchell) in present day, but in 2016, Stevie was facing a horrific ordeal after her sister was involved in lorry crash.

Due to a mistake Ethan made in 2016, Stevie’s sister has been left with lifelong injuries.

We’ve got questions, answers, quotes from stars, so here’s a rundown of what you need to know as Casualty begins its thirty-sixth series.

Matthew and Ethan are seen fighting in a future episode as the grieving single father asks Matthew if Fenisha ever loved him.

Given the fact that Stevie has already taken a shine to Matthew, could she use the upcoming feud to her advantage?

Will Stevie tell Matthew about Ethan’s mistake? Possibly leading to them joining forces to bring down the troubled Ethan Hardy?

Saying that, Matthew hasn’t really shown us his bad side, so if he finds out what Stevie is up to, will he warn Ethan?

Can Ethan cope on his own?

We’ve already established visions of Cal will return in a future episode so, probably the answer to the above question is no, Ethan won’t cope on his own.

‘You have been a rock for me to hold onto’, Ethan says as we see another glimpse of Cal in the trailer.

Past trauma for Ethan has taught us this is a character who tends to struggle on his own before asking for help.

In a recent interview, George Rainsford explained that after everything Ethan has been through, ‘he has become accustomed to (at time’s consumed by) grief but is not defined by it. His still wants to be happy’, but with no Cal, no Fenisha, barely any friends, who will Ethan reach out to as he comes to terms with the loss of his fiancé and being a single parent?

Will Jade get tangled into Stevie’s revenge?

A young Jade (Gabriella Leon) featured heavily in the 2016 scenes tonight. The accident involving Stevie’s sister was a huge catalyst for Jade becoming the nurse she is today, but will she remember the events of 2016 when Stevie puts her revenge into place?

The trailer also shows Jade’s mother returning, so suffice to say there’s dark times on the horizon for this young nurse.

What will Teddy and Sah get up to?

New paramedic Teddy (Milo Clarke) arrived tonight and tried to start a feud with Charlie (Derek Thompson) over some catfishing texts he had been sending Teddy’s mum.

Young, enthusiastic Teddy is set to wear down his Auntie Jan (Di Botcher), but as we’ve seen in the trailer, Jan is set to face her own trouble soon involving Ffion (Stirling Gallacher), so without Jan’s support, could Teddy end up losing his way?

There’s also the new arrival of Sah – a paramedic who we don’t know a single thing about.

If Sah is a young new paramedic, could working with Teddy – another junior paramedic – lead to trouble?

So, as we mentioned, Ffion is set to face a new battle as we head into series 36.

The last we saw of Ffion; she was caught in the middle of Jan and Ross’ (Chris Gordon) drug smuggling ordeal.

Coming up, Dylan (William Beck) tells Ffion a scan has shown a mass, which means there’s potentially a difficult and upsetting road ahead for her.

Loretta Preece tells us this new storyline will see Jan and Ffion’s marriage ‘pushed to its limits’ – but can they move past everything that happened with Ross so Jan can support her wife?

‘I saw them stop and search you. You’re a doctor and even you get hassled’, someone tells Rash (Neet Mohan) in the trailer.

Previous clips tell us Rash will be facing his own ordeal soon when he’s stopped and searched by a police officer.

Could this be the start of a huge new storyline for Rash?

Will Casualty shine a light on racial inequality throughout this new series?

Jacob proposes as Tina’s hold over him gets worse

A recent episode of the medical drama allowed us to see the beginning of a coercive control storyline involving Jacob (Charles Venn) and girlfriend Tina (Adele James).

Clips from the trailer tell us things will get a lot worse for Jacob as in the midst of some intense abusive scenes, we see him proposing.

Speaking about what’s to come for these characters Casualty boss Loretta Preece told us ‘we’ll be delving further into this [coercive control] with some heart-breaking scenes as the series progresses’.

As Tina will no doubt be over the moon by Jacob’s proposal, will the toxic relationship really go as far as making it to the altar?

Or can Jacob seek help before that?

Well, speaking of which, the trailer also shows us a certain Iain Dean rushing into Jacob’s house to see him seriously beaten and on the floor.

Recently, Metro.co.uk spoke to Charles Venn where he hinted that a ‘perceptive’ Iain Dean could be the one to save Jacob from his living hell.

After Iain’s depression and suicide ordeal a few years ago, this is a man perfect to try and help Jacob, but will Jacob accept help?

Iain tells his friend, ‘it’s about admitting something isn’t right’, but can Jacob see his relationship with Tina is abusive?

As we say another goodbye to Noel and Big Mac, tonight sets us up for a huge new series of Casualty.

After 35 years, this BAFTA award winning medical drama just continues to get better and better.