There's a lot of questions that could be put to Manny Ramirez right now.

For instance, what is he doing in Sydney? In the middle of a pandemic? At the ripe old age of 48? And how on earth is he still playing professional baseball?

The simple answer to all of them is … why not? 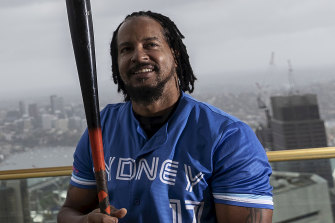 The new face of the Australian Baseball League is an old face to Major League Baseball diehards. Ramirez is a legend of the game: a 12-time all-star, a two-time world series winner and the MVP in 2004 when he famously led the Boston Red Sox to their first title in 86 years.

He's also just finished his two-week stint in hotel quarantine, giving him just over a fortnight until he makes his debut for the Sydney Blue Sox on December 17 in Blacktown.

"As soon as I got out of the hotel, I was running the street saying, 'I'm free!'" Ramirez said on Wednesday at his official unveiling at the top of Sydney Tower.

"Everybody was looking at me: 'What's wrong with that guy? That guy's crazy.' But I was real happy just to come out the quarantine and now, to be doing what we love to do."

Ramirez isn't here for the money. With a reported net worth of US$110 million ($150 million), he doesn't need it, and whatever the Blue Sox could offer him, he could probably find between the cushions of his couch back in Miami. 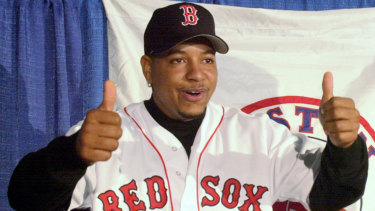 Manny Ramirez was a key part of the Boston Red Sox team that broke an 86-year World Series drought in 2004.Credit:Reuters

His last MLB game was way back in 2011, but with more than enough cash in the bank to enjoy a happy, healthy retirement, he's still going.

Since then, Ramirez has spent time with the minor league affiliates of three different MLB teams, including the Chicago Cubs, where he was a batting consultant when they broke their own 108-year world series drought in 2016.

He's also played for the EDA Rhinos of the Chinese Professional Baseball League, the Kochi Fighting Dogs in the Japanese Shikoku Island League Plus – an independent league of just four teams – and for Aguilas in his native Dominican Republic. It seems wherever there's a team that needs a power hitter, Ramirez is willing to at least hear them out.

He told the Herald he's been eyeing off the ABL for a while and had no reason to turn down the Blue Sox when they pitched him an offer – not even COVID-19, the prospect of 14 days locked in a hotel room, or a few months away from his family, who have stayed behind in the US while he continues to chase his dream.

"I was helping my kids' high school [team], I was hitting and running, doing all that stuff and my agent called me," he said.

"I was going to go to the Dominican Republic … but I saw the potential that Sydney has and what it could be for baseball.

"To be honest, there's a lot of talent here. They just need maybe to promote it here. I think what they need is more repetition, more advice – what we do in the States. It's a great opportunity here to build something good.

"[My career has] been a blessing. I'm here to pass on my knowledge to these young players so they can move on. All that experience, why not to pass it to the young guys?"

The ABL has never seen a bigger name or a bigger personality than Ramirez. He's still in good shape, too – even with the flecks of grey in his dreadlocks and facial hair, you'd be hard-pressed to guess he's approaching 50 years of age.

But can he still swing a bat? Has he still got it?