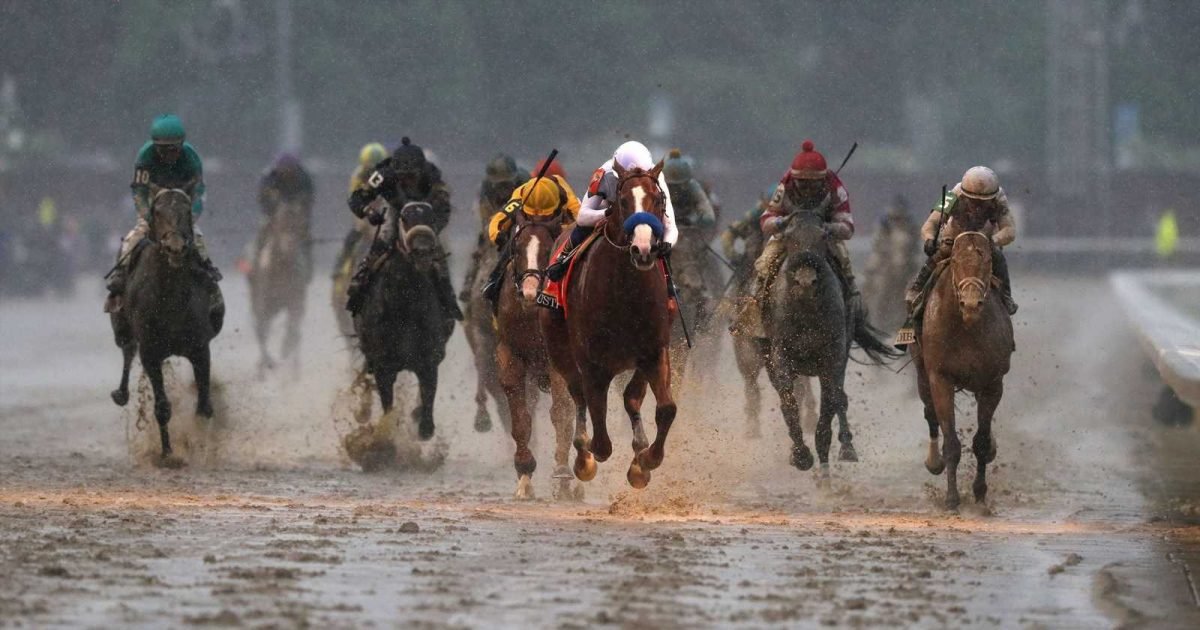 So, it's probably gonna rain Saturday.

As this annoying recent Kentucky Derby trend continues, the forecast isn't leaving much uncertainty about it this time. Saturday is being given a 100% chance of precipitation. While it might not match the day long deluge of a year ago or even be raining at 6:50 p.m. when the race begins, it's almost certain that the horses will be running on a wet track again this year.

In handicapping efforts, it's time to plan for that. Obviously, an off track has the potential to change everything about a horse race, including the most famous one in the world.

The general thought is rainy conditions tend to help front-running horses rather than back-of-the-pack closers who'd have to deal with heavier mud being kicked in their faces. That's even more so in a 20-horse field running a 1 1/4-mile race.

But it can work both ways. A mad scramble for early positioning could mean a faster pace and a possible pace meltdown that allows a determined closer a late opportunity if he's determined and happens to take well to the slop.

The thing about 3-year-old horses is they don't have a lot of races in their history, so the few with a proven affinity for wet tracks figure to stand a clear advantage.

Omaha Beach, the scratched morning-line favorite, actually looked to be the horse helped most by rain. He was 2-for-2 in sloppy conditions and was well-drawn outside of much of the race's other early speed.

But with Omaha Beach out of the race, let's wade through some wet tea leaves for the remaining runners.

Justify leads the pack as he approaches the finish line to win the 144th Kentucky Derby at Churchill Downs in Louisville, Kentucky.
May 5, 2018
(Photo: , Michael Clevenger/Courier Journal )

Who could be helped by rain?

Drawing the No. 1 post seemed a kiss of death for War of Will. But it should be noted that he not only won his only race on a sloppy surface — he won it at Churchill Downs.

War of Will's maiden victory was a sloppy Maiden Special Weight race at Churchill on Nov. 24. He won it by five lengths.

The early speed angle applies here. Maximum Security is unbeaten in four races and has shown the ability to grab an early lead and wire a field, which could be especially useful in the slop. His second career win in January was by 6 1/2 lengths on a messy surface at Gulfstream Park (with an apprentice jockey, no less), so he is 1-for-1 in wet conditions.

LONG SHOTS: 5 underdog horses who could win the Derby

Improbable was second by a length to Omaha Beach in a rainy Arkansas Derby last month, producing his best speed figure to date in the process.

These two horses also should be forwardly placed and though they have never run a race on anything but a fast surface, they share the same sire in Candy Ride (ARG). Each is rated to be bred exceptionally well to handle a wet surface, perhaps more than any other horse in this field.

Plus Que Parfait ran a career-best speed figure on a sloppy track at Churchill Downs on Nov. 24, finishing second to Signalman in the Kentucky Jockey Club Stakes.

Tacitus broke his maiden Nov. 10 on a track rated "good" at Aqueduct. He is also considered to be bred well for wet conditions, though considering the fact his sire is Tapit, he's bred well, period.

Spinoff's maiden victory was a five-furlong sprint on a good surface last summer at Gulfstream.

Master Fencer's maiden victory Dec. 23 was on an off track in Japan.

Who could be hindered by rain?

The same sloppy Arkansas Derby that saw Omaha Beach and Improbable in the top two spots went poorly for Long Range Toddy, who finished sixth of 11 horses, nearly 15 lengths back of the leaders. It was his slowest speed figure in a while, perhaps a clue that a wet surface is not going to be his friend.

In two tries on off tracks, By My Standards lost both times. Granted, this was a while ago and he is a horse that improved significantly in his past two races (and should be viewed as such), but in both wet races, he lost ground late.

The first of those was on a sloppy surface Nov. 24 at Churchill. Granted, it was By My Standard's debut race (and should be viewed as such), but he finished second in that race by 4 lengths to Jersey Agenda, who was eighth in the Southwest Stakes, fifth in a division of the Rebel Stakes and seventh in the Arkansas Derby (also a muddy race).

A long shot in this race anyway, Gray Magician finished poorly on a sloppy surface at Santa Anita on Jan. 31, tiring at 1 mile and finishing fifth after battling for the early lead.

He's a deep closer with a serious late kick, but consider that Win Win Win sandwiched wins of 6 1/2 lengths and 7 1/4 lengths around a loss — as a heavy favorite — in a Dec. 29 race at Laurel Park on a "good" surface. That was his only race to date on an off track.