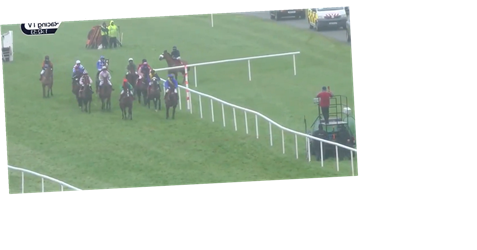 YOU Say Nothing's 15-length win at Punchestown was marred in controversy after the horse set off while a rival runner was not even on the track.

Replays showed the Gavin Cromwell-trained runner charge towards the first while My Manekineko was still walking behind a rail.

The starter's flag went down indicating the race had started and 7-2 favourite You Say Nothing took off in a lead he would never relinquish.

Yet 16-1 chance My Manekineko was stuck in no man's land and 50-1 shot Fox Fearless was also out of position.

Horses are usually grouped closely together at the start to ensure a fair shot as they await the starter's call.

But several horses looked like never having a chance due to the controversial start – at the course where last Sunday a SWAN got in the way of a race.

Cromwell admitted his horse got a good break.

He said: "He got a freebie out the gate and Joey [Dunne, jockey] got his fractions right."

But they slammed the starter for not being sharper and said it should have been a false start.

O'Ryan said: "It was a strange start to say the least. My Manekineko was not even on the track.

"If you backed a few of those horses at the back you had no chance from the time the pace went off.

"You're supposed to give them all a fair start. Our starter had the red flag raised while My Manekineko was still off the track.

"He could see everything that was going on.

"Look, we see false starts, it's not the easiest job in the world, far from it, but that to me, I thought it was going to be a false start.

"There's no doubt the best horse has won but it's all about giving them a fair start."

Asked whether he thought it was a fair start, respected racing journalist Donn McClean said: "No it wasn't.

"They should have been closer up but I think the riders probably should have showed more urgency to get up closer to the leader and starting line."

O'Ryan added: "That to me was a very unfair start."

One punter watching the race could not believe what happened either.

They said: "Should be voided. That was shameful."

Another said on Twitter: "Absolutely shocking by the starter. Disgrace!"