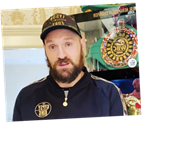 Tyson Fury has asked the BBC to remove him from the Sports Personality of the Year shortlist.

But Fury believes he is the “people’s champion” and doesn’t require any further accolades.

“Hi this is Tyson Fury, the Gypsy King,” he said on Instagram. “This is a message for the @bbcsport and their SPOTY award. Please take me off your list as I’m the people’s champion and have no need for verification or any awards.

He went on to ask that any fans respect his wishes and don’t vote for him to win the prize when voting opens.

READ MORE: Who is favourite to win Sports Personality of the Year?

“I have the love of the people which is worth more to me than all the awards in the world,” he continued.

“To anyone who supports me don’t vote. All my love Gypsy King.”

The 31-year-old produced the most destructive performance of his career to end Wilder’s five-year reign as champion in seven thrilling rounds in Las Vegas.

Fury has had to shelve plans to fight in London before the end of the year and will delay his return to the ring until 2021.