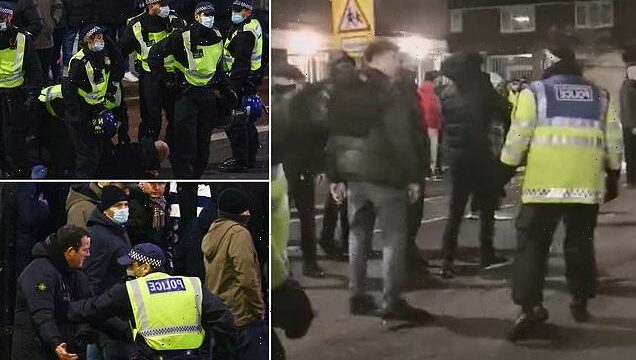 Tottenham and West Ham fans violently clashed before their Carabao Cup tie on Wednesday night, with several police officers forced to separate them outside Spurs’ stadium.

The two rivals are facing each other in a London derby with a long history of matchday fighting between the two teams.

On Wednesday, several clips emerged on social media of fans fighting on High Road that runs alongside Tottenham’s home ground, with one supporter appearing to be knocked out amid the fighting.

Other footage showed police standing in the middle of High Road with West Ham fans kept to the left-hand side, while officers used batons to keep the two sets of fans apart.

West Ham fans were heard singing the chant ‘Irons’ and ‘Tottenham get battered, everywhere they go’, while some supporters used the Anti-Semitic term ‘yid’ to describe Spurs fans. 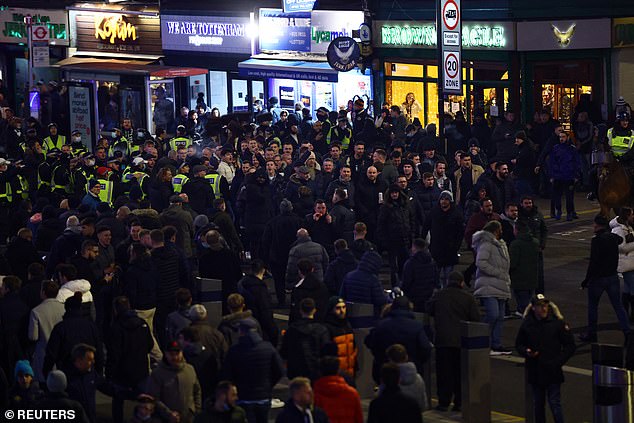 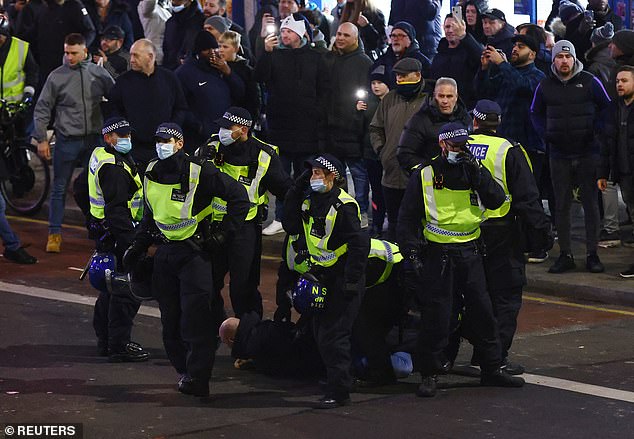 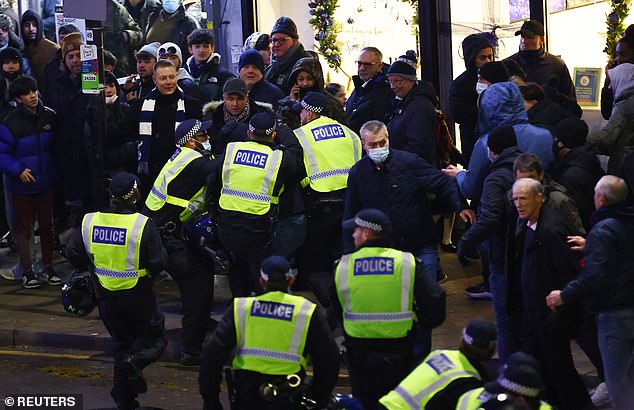 Officers detained a supporter amid clashes between fans before the 7.45 GMT kick-off on Wednesday 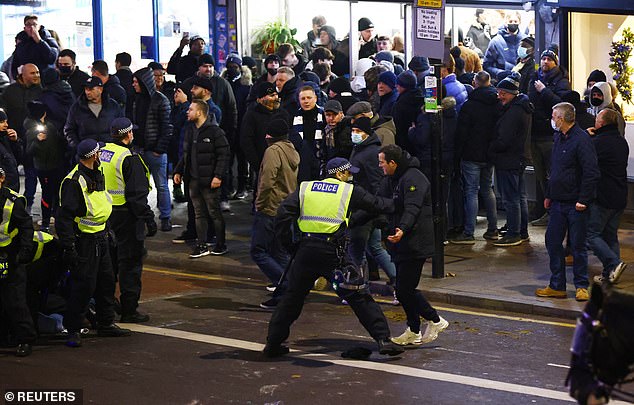 Warning: The below video contains violent scenes with Anti-Semitic and explicit language which some readers may find disturbing

The two teams are competing on Wednesday night for a spot in the Carabao Cup semi-finals in early January.

Tottenham last won this competition in 2008, while the Hammers have never lifted the League Cup before, though were runners-up in 1966 and 1981.

The same sets of fans clashed during their Premier League clash at West Ham’s London Stadium in October, with fighting emerging on the concourse after a Tottenham fan kicked down a door separating the two groups.

Shocking video footage from the October encounter showed the Spurs supporter managing to drift past four stewards guarding the doors and break down the barrier, with both sets of fighting when it was opened. 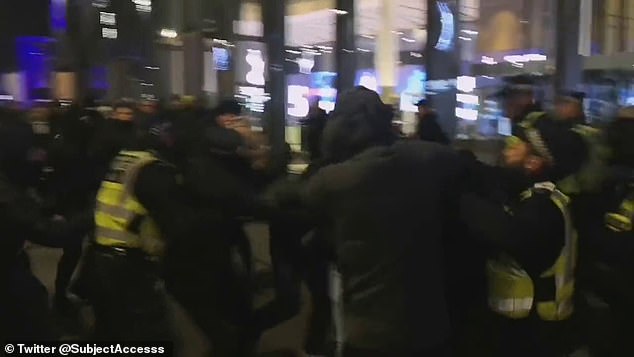 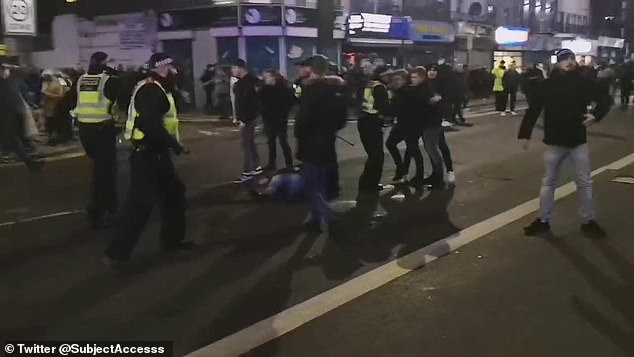 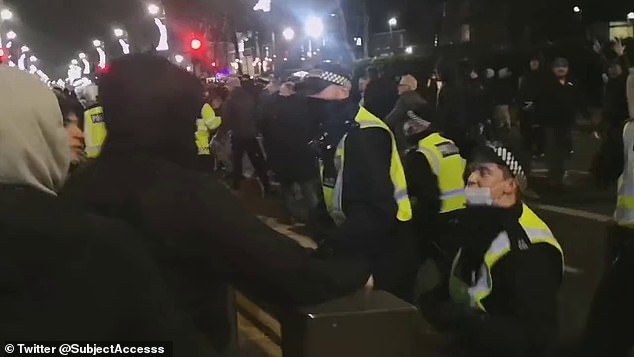 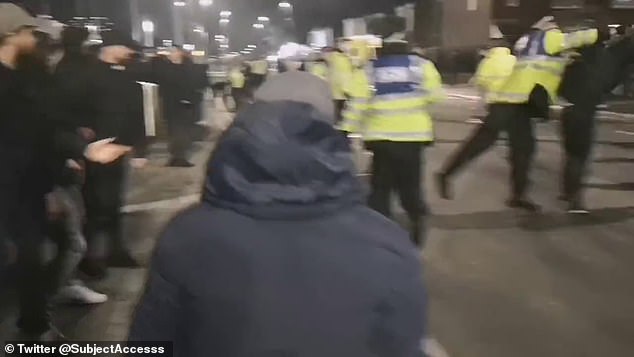 Stewards on either side of the door eventually managed to form their own barrier to do their best to keep the fans apart, but supporters on either side threw punches at their rival fans, while plastic cups of beer were also thrown inbetween the doorway.

After the first time Tottenham fans managed to break down the door, several more Spurs fans attempted to break through the door to fight the Hammers supporters on the other side.

Tottenham fans were heard singing ‘No noise from the p**** boys’ throughout the incident, while West Ham fans were chanting ‘Irons’ as they faced the prospect of taking on Spurs fans on Sunday afternoon.

The two clubs are fierce rivals in the Premier League, while Hammers and Spurs fans have a long history of violence during top-flight matches. 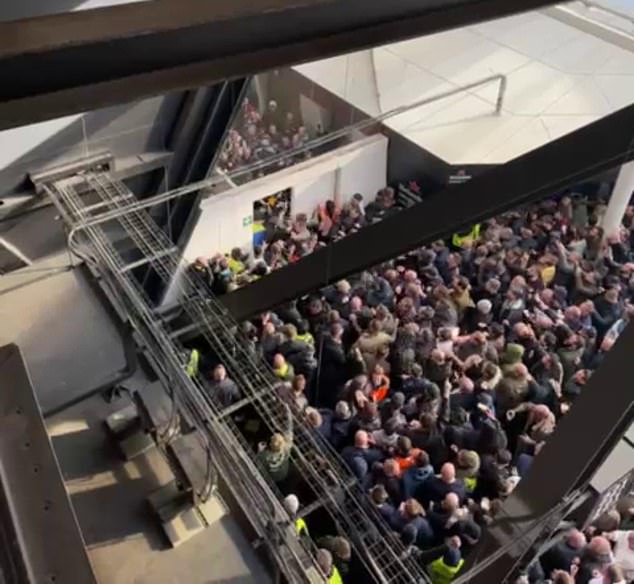 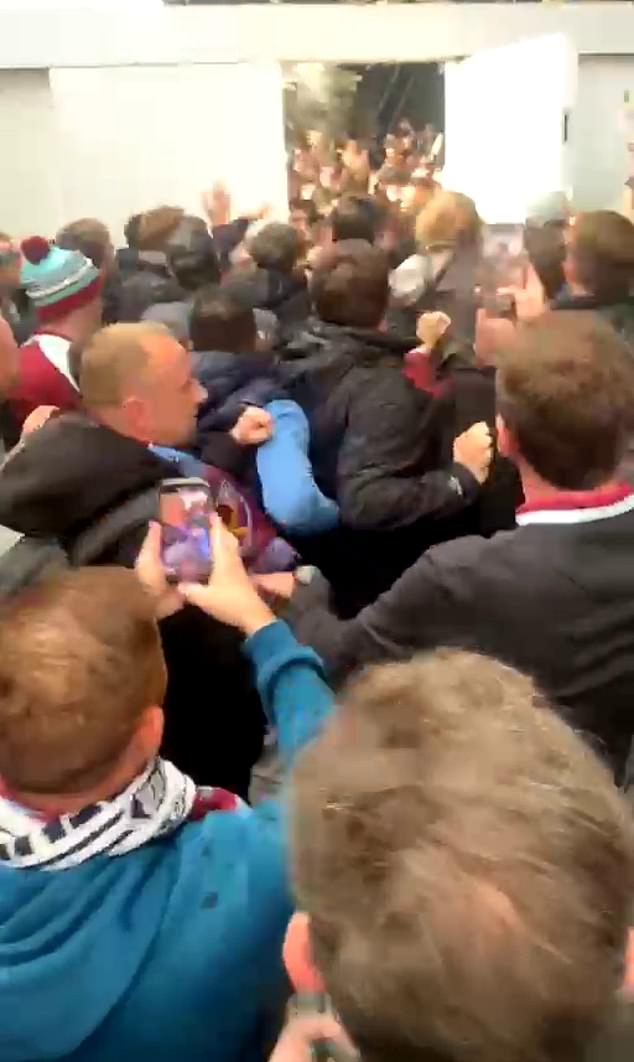 After Tottenham fans broke down the door, West Ham fans tried to fight Spurs fans who were trying to get through the doorway

In November 2015, a 35-year-old West Ham supporter was left hospitalised after being stabbed in the stomach, hundreds of fans from either club had to be restrained by police on horseback before kick off at Tottenham’s White Hart Lane ground.

According to a bystander at the time, a large contingent of West Ham supporters were being shepherded by police into the ground when a group of ‘half a dozen’ attempted to break away and punched a Tottenham fan walking by.

In November 2018, two Tottenham supporters sitting in West Ham’s London Stadium home end were ejected from the home end were attacked as they were escorted out of the ground.

As they were walking down a flight of steps they were targets of verbal abuse before one supporter threw a drink in their direction. As they continued to walk, video footage shows punches being aimed at them before stewards finally managed to bundle them away from the stands.