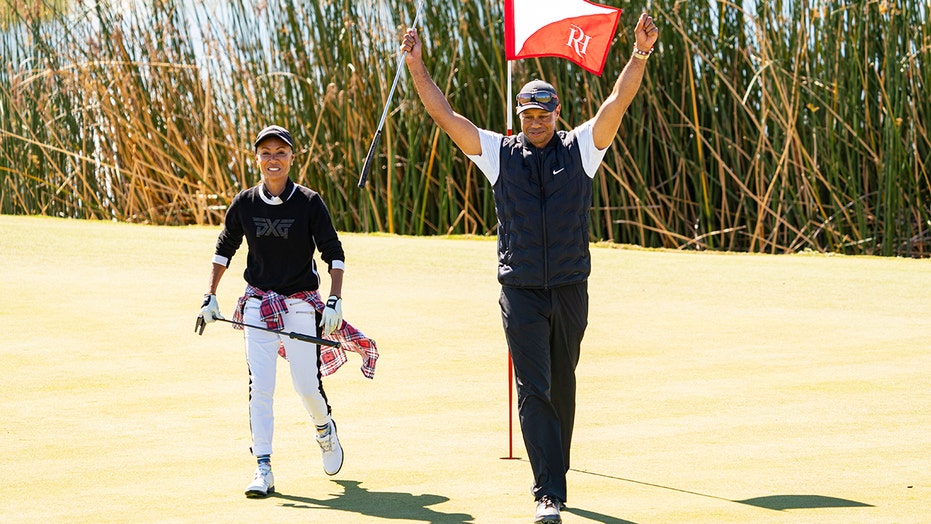 Tiger Woods was filming a show for Discovery and Golf Digest in the days leading up to his horrific crash in Los Angeles in February that left him with a significant leg injury.

On Tuesday, the first episode of “A Round with Tiger: Celebrity Playing Lessons” was released. The first show features Woods playing golf with actress Jada Pinkett Smith.

“This series was filmed on Feb. 22, 2021, the day before Tiger Woods’ car accident. We’re sharing this content with the blessing of Tiger and his guests,” the first episode starts.

“We thank everyone for their involvement and wish Tiger a continued speedy recovery.”

In the episode, Pinkett Smith called her day with Woods a “dream come true.”

Woods has mostly been seen on crutches in photos and has released updates sparingly on his recovery since the crash. This week, Woods spoke at length with Golf Digest in May about his rehab.

“This has been an entirely different animal,” Woods said in an interview published Thursday. “I understand more of the rehab processes because of my past injuries, but this was more painful than anything I have ever experienced.”

A doctor who treated Woods initially said the legendary golfer suffered open fractures affecting his tibia and fibula, injuries to his foot and ankle, and trauma to the muscle and soft tissue of the leg “required surgical release” to relieve the pressure. A crash report later revealed Woods was also “knocked unconscious, laceration to the lower front jaw, bruised right and left rib cage, fractured right tibia and fibula, possible right ankle injury.”

He had stints in two different hospitals before returning home to Florida to recuperate.

“My physical therapy has been keeping me busy. I do my routines every day and am focused on my No. 1 goal right now: walking on my own. Taking it one step at a time,” he told Golf Digest.

Woods said he appreciated the support he had been getting through the process.

“It’s been incredible,” he said. “I have had so much support from people both inside and outside of golf, which means so much to me and has helped tremendously.”

Woods was driving at an unsafe speed when he wrecked his vehicle in the Los Angeles area in February, authorities said in April. Woods was driving between 84 and 87 mph when he first made impact, Los Angeles County Sheriff Alex Villanueva said during a news conference. He was driving 75 mph when the vehicle hit a tree. The posted speed limit was 45 mph.

Authorities said there was no evidence of impairment when first responders arrived. Officials said Woods had no recollection of the wreck.

Woods was not charged.