Tokyo: A Japanese sumo wrestler has died a month after falling on his head during a bout in a case that has raised questions about the sport’s response to medical emergencies.

The wrestler, whose real name was Mitsuki Amano, was thrown by his opponent during a bout at a tournament on March 26. Video of the bout showed he fell hard on his head and lay face down for several minutes while sumo officials watched and waited for paramedics to arrive. 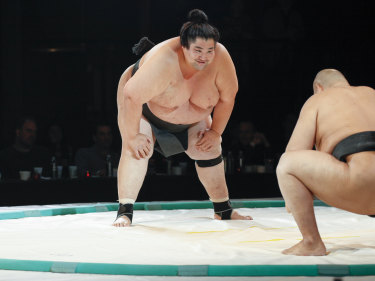 The tragedy has led to a review by officials on ways to improve emergency medical response at bouts. Credit:

On a stretcher, the wrestler was conscious and told sumo officials that he felt his lower body was paralysed, but his condition had been improving at the hospital, Nikkan Sports newspaper reported.

The Japan Sumo Association said on Friday that it was unknown whether Hibikiryu’s death was related to his injury. It said details of the injury, including whether he suffered paralysis, could not be released. There was no immediate comment from his family.

There were no medical experts standing by to give him medical treatment, according to Japanese media reports. Wrestlers are customarily expected to get up by themselves, while medical experts are at the tournament site but not standing by near the ringside.

Sumo officials are discussing ways to improve emergency medical response, including how to handle concussions, in future bouts, the association said.

The ancient Japanese sport, which originally was part of a Shinto religious ritual, has faced calls for reforms, including of its medical response and its ban on women entering the ring, which is considered sacred.

In 2018, the association came under fire after demanding a nurse and other women leave the ring, which they had entered to give first aid to an official who had collapsed.

Hibikiryu debuted in 2011 and rose as high as 24th in the 200-member sandanme-class, the fourth highest of sumo’s six ranks.

Another young, lower-tier sumo wrestler, Shobushi, died last May at age 28 after contracting the coronavirus.